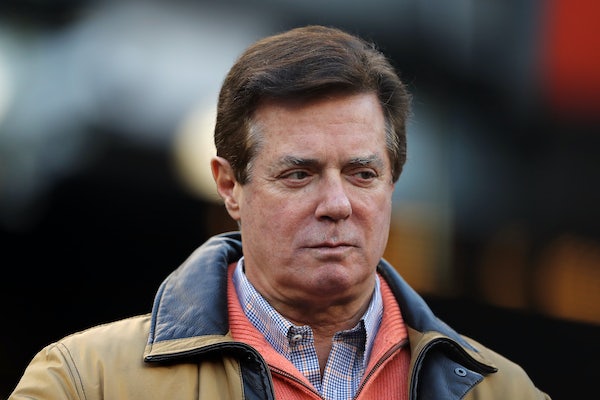 Paul Manafort is the first domino to fall in Robert Mueller’s Russia probe.

Multiple outlets are reporting that Manafort, who served as Donald Trump’s campaign chair from May 2016 to August 2016, and Rick Gates, Manafort’s longtime business and lobbying partner, were asked to turn themselves in to authorities.

Speculation centered on Manafort immediately after it leaked last week that special counsel Mueller would be handing out indictments on Monday. Manafort, who was deeply in debt to Russian oligarchs and was not paid for his services as campaign chair, has a long history of shady political and economic dealings, both in the United States and Ukraine, where he was seen as a close ally of pro-Russian former Prime Minister Viktor Yanukovych. Over the weekend, BuzzFeed reported that Mueller was focusing on 13 suspicious wire transfers involving companies linked to Manafort and various offshore accounts.

It therefore seems most likely that these indictments are not related to collusion, but to various financial crimes, possibly including money laundering and fraud. Mueller is expected to use the indictments to pressure Manafort to reveal more information about the relationship between Trump’s campaign and various Russian officials and others with ties to the Kremlin.

But this is still a significant and serious step for this investigation. Republicans and President Trump have both been arguing, explicitly and implicitly, that the Mueller investigation is winding down, that it has not found any collusion, and that the entire operation is a wasteful, politically motivated exercise. The indictment of Trump’s former campaign chair makes it clear that none of those arguments are true—if anything, this is just the beginning of Mueller’s investigation, which will now try to use its leverage to get Manafort to turn on others within the president’s orbit.

The biggest question now, however, is not what Mueller does, but what Trump does. The president’s allies are likely to act like this is a big nothingburger, and to dismiss Manafort as someone who was only briefly within Trump’s inner circle. That defense largely misses the point, however, which is that someone like Manafort was ever close to a major presidential candidate to begin with.

Trump, who has mused about firing Mueller in the past, may see this as a breaking point—it’s better to try to fire the special counsel now than later. That would be a constitutional crisis, a disaster that Republicans clearly aren’t prepared for. But it’s a real and terrifying possibility.