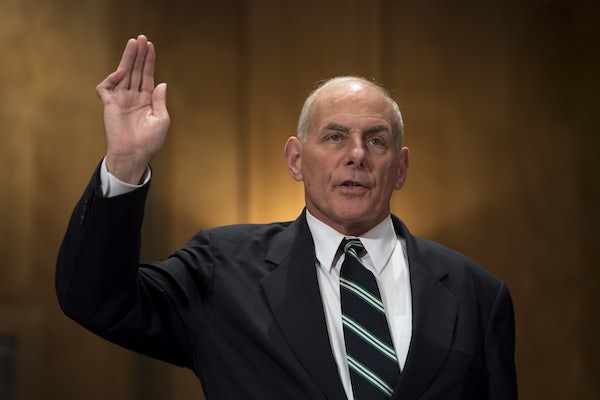 Who could have predicted that John Kelly would have racist views about the Civil War?

Brace yourselves: Kelly, who willingly joined the Trump administration and orchestrated an inhumane immigration crackdown in his role at the Department of Homeland Security, likes Confederate monuments. It’s shocking, I know. Who could have seen this coming? Certainly not the Beltway press, which repeatedly referred to him as a “moderating force” inside the haunted mansion that is the White House.

Here’s Kelly in his own words, defending the preservation of monuments to the Confederacy:

I think we make a mistake, though, and as a society, and certainly as individuals, when we take what is today accepted as right and wrong and go back 100, 200, 300 years or more and say, “What Christopher Columbus did was wrong.”

Actually, what Christopher Columbus did was wrong. But as Kelly approaches more recent history, it somehow gets worse:

I would tell you that Robert E. Lee was an honorable man. He was a man that gave up his country to fight for his state, which 150 years ago was more important than country. It was always loyalty to state first back in those days. Now it’s different today. But the lack of an ability to compromise led to the Civil War, and men and women of good faith on both sides made their stand where their conscience had them make their stand.

But we know why the Confederacy tried to secede. Any “compromise” would’ve involved keeping human beings in chains—an outcome that apparently doesn’t disturb our fine general. And the idea that Lee was “an honorable man,” instead of an enslaver who put men to the sword to defend the institution of slavery, is so off that it is not merely ahistorical, but a form of intransigence.

Kelly has performed at least one service. He has reminded the political press that the types of people who join the Trump administration are rarely moderates, especially when it comes to race.