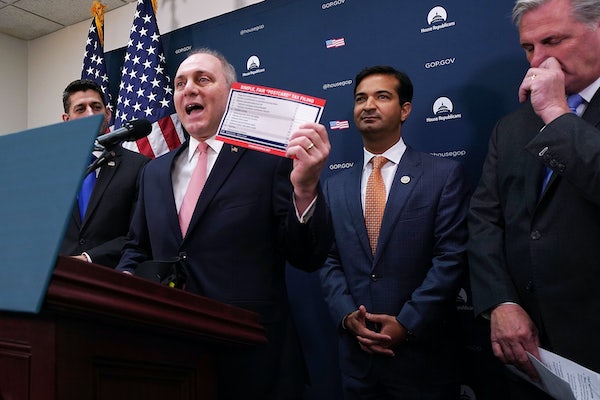 There is no reason for the Republican tax bill to exist other than cutting taxes for the wealthy.

Republicans have been pushing their latest attempt to get something done in the first year of Donald Trump’s term as “tax reform” or, reportedly at the president’s urging, “tax cuts.” They’ve pushed their bill, kept under lock and key until Thursday morning, as a necessary updating of the tax code, as well as a simplification: Republicans, Paul Ryan has said again and again, want you to be able to file your taxes on a postcard.

The bill is centered around a massive corporate tax cut, but Republicans have dismissed this notion even though numerous analyses of earlier outlines have shown that the wealthy would disproportionately benefit. Instead, Republicans have pitched it as a middle-class tax cut and job creation bill, based on the assumption that cutting taxes for corporations and the wealthy will create abundant economic growth, something that hasn’t happened before.

The bill is finally out and it’s basically the opposite of what they’ve claimed it would be. Its changes to the taxation of S corporations and partnerships seemingly make the tax code more complex, for instance. While it doesn’t alter the taxation of 401(k) savings accounts or repeal Obamacare’s individual mandate (as some have called for, in an attempt to make the bill add slightly less to the deficit), there’s little in it for working- and middle-class tax payers. The tax breaks for middle-class families are set to expire in five years, while the corporate tax rate is permanent. And, while the top tax rate remains just below 40 percent, the threshold for married couples paying that rate is increased to $1 million. The estate tax, meanwhile, which only affects the super-wealthy, is set to be repealed in 2024.

There’s one big reason why Republicans are pushing this bill: They need to pass something soon, before the 2018 reelection season kicks in. Republicans are most comfortable cutting taxes, so they believe that this bill—which is centered around the unpopular policy of cutting corporate taxes—has a better chance of passing than Obamacare repeal did. It’s driven by political desperation more than anything else, which helps explain why Republicans have struggled to explain the necessity of cutting corporate taxes. After all, as President Trump points out repeatedly, the stock market is doing great. If there’s a problem with the economic recovery, it’s that its gains have been felt unequally. But this bill only furthers inequality, aiding sectors of the economy that are not in need of economic help while ignoring individuals and families who are.