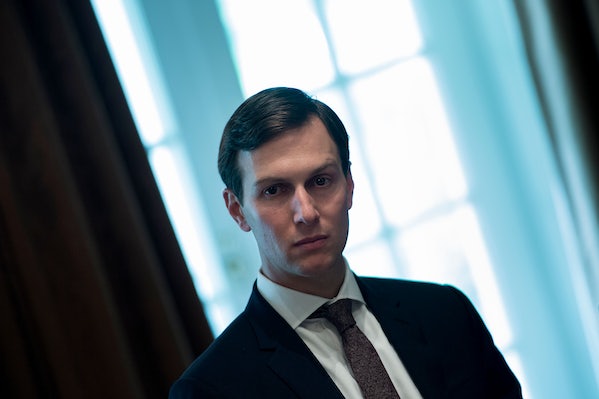 Last weekend, Jared Kushner, in his capacity as his father-in-law’s viceroy in the Middle East, made an unexpected visit to Saudi Arabia and spent time with the country’s de facto ruler, Crown Prince Mohammed bin Salman. “The two princes are said to have stayed up until nearly 4 a.m. several nights, swapping stories and planning strategy,” David Ignatius wrote in The Washington Post, noting that the prince is “emboldened by strong support from President Trump and his inner circle” and it “was probably no accident” that this intimate meeting took place shortly before the prince arrested his political rivals in a sweeping effort to consolidate power.

As The New York Times reports, the purge is truly revolutionary:

A midnight blitz of arrests ordered by the crown prince of Saudi Arabia over the weekend has ensnared dozens of its most influential figures, including 11 of his royal cousins, in what by Sunday appeared to be the most sweeping transformation in the kingdom’s governance for more than eight decades.

The arrests, ordered by Crown Prince Mohammed bin Salman without formal charges or any legal process, were presented as a crackdown on corruption. They caught both the kingdom’s richest investor, Prince Alwaleed bin Talal, and the most potent remaining rival to the crown prince’s power: Prince Mutaib bin Abdullah, a favored son of the late King Abdullah.

The timing of this plot, so soon after its architect met with Kushner, indeed seems more than coincidental, raising more than a few questions that demand answers. Most importantly: Did the White House greenlight the Prince Mohammed’s power play? And if so, did the White House do so to punish Talal for criticizing Trump during the Republican Party?

Congress has oversight power on U.S. foreign policy. If the Republicans were responsible enough to exercise it, they’d be scheduling hearings on Saudi Arabia right now.