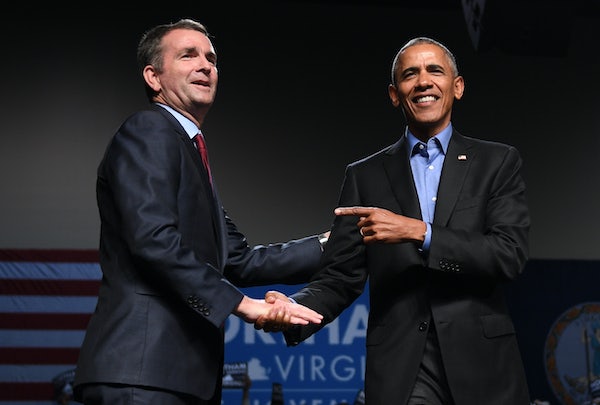 Democrats are running the tables in Virginia—and Republicans should be very worried.

Lee Carter is an openly socialist veteran of the U.S. Marine Corps, and on Tuesday night he defeated Republican House Majority Whip Jackson Miller by a comfortable ten-point margin:

In District 13, Danica Roem defeated a Republican incumbent and made history:

Marshall had previously introduced a version of the discriminatory “bathroom bill,” which targeted trans Virginians. Dems have also flipped Districts 2, 10, 31, 32, 42, 51, 67, 72, and 73, which places them in striking distance of winning a majority in the House of Delegates:

Tonight has been filled with extraordinary results like this:

These are still early hours, but a few takeaways are clear. First, the Democratic Party should invest in state races. Second, Democratic campaigns can overcome Trumpian identity politics and economic populism. Third, the party’s national controversies don’t necessarily filter down to state politics (Donna Brazile did not cost anyone a seat tonight). Democrats will comfortably take the governor’s mansion and even if they don’t take the General Assembly, they’ve already outperformed expectations. Ralph Northam, who will be Virginia’s next governor, also outperformed Hillary Clinton’s November results, despite a number of last-minute fumbles.

And that means Republicans should worry. Trump is a depreciating brand in states like Virginia. Ed Gillespie’s race-baiting waltz with the far-right didn’t make him governor. It didn’t even help his party maintain its death grip on state legislature seats. It just didn’t work at all.