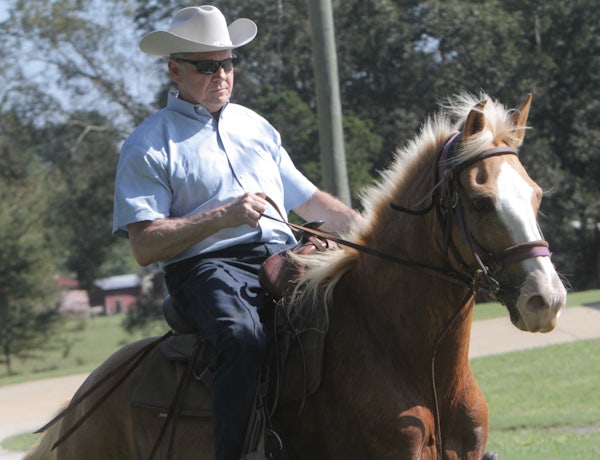 This is why you don’t endorse Roy Moore.

Moore believes that homosexuality should be illegal. He believes that Muslims should not be allowed to serve in Congress. He does not believe in evolution. He believes that there are communities in the United States living under Sharia law. He believes that 9/11 was divine retribution for the nation’s sins. He believes that Barack Obama was not born in America. He was suspended from Alabama’s Supreme Court for refusing to recognize gay marriage. He installed a 5,280-pound granite monument of the Ten Commandments on the lawn of Alabama’s judicial building.

And it was just reported by The Washington Post that he allegedly molested a 14-year-old girl 38 years ago.

This last bit of information is causing some handwringing among certain Republican congressmen. Jeff Flake—who, very much to his credit, was the rare Republican who refused to endorse Moore—has already called on him to withdraw if the allegations are true, as have several others. This is unlikely to happen—Moore vehemently denies the charges, though they are highly credible.

While it’s true that no one could have seen this specific charge lobbed against Moore, given his lawless, theocratic, bigoted bent, Republicans had ample reasons to keep their distance from Moore before he was accused of molesting a teenage girl. And yet, Senate Republicans—including a number of high-profile Christian conservatives—embraced him.

“Judge Moore’s tested reputation of integrity is exactly what we need in Washington, D.C., in order to pass conservative legislation and protect the liberty of all Americans,” read Mike Lee’s endorsement. “Judge Moore has a lifelong passion for the Constitution and the Bill of Rights, and he has the courage of his convictions,” wrote Ted Cruz, who has fundraised for Moore. “We need more people in Washington, D.C., that will stand on principle and defend the Constitution,” wrote Rand Paul in his endorsement. He added, “Roy Moore has spent a lifetime defending and standing up for the Constitution while fighting for the people of Alabama.”

These statements are particularly shameful in the wake of the Post’s reporting. But they were shameful from the beginning.