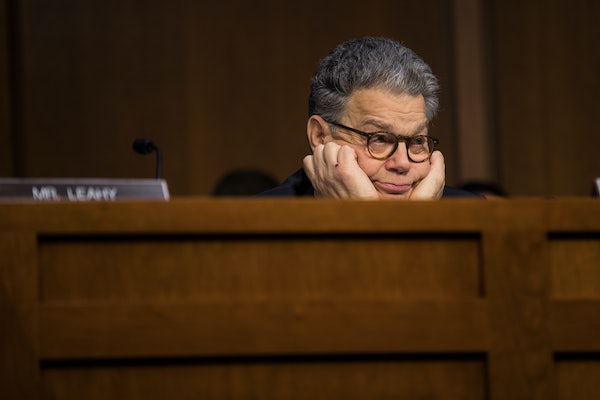 A second woman has accused the Minnesota Democrat of groping her. Lindsay Menz told CNN that Franken grabbed her rear end during a photo op at the 2010 Minnesota State Fair:

Then, as her husband held up her phone and got ready to snap a photo of the two of them, Franken “pulled me in really close, like awkward close, and as my husband took the picture, he put his hand full-fledged on my rear,” Menz said. “It was wrapped tightly around my butt cheek.”

Franken had previously been accused of forcibly kissing Leeann Tweeden during a USO tour. Some party diehards may be tempted to stress that groping and forced kissing are not equivalent to, say, Roy Moore’s alleged abuse of teenagers. That is true, but it hardly means Franken should stay in office. This is the first lesson of #MeToo: Where there are two allegations, more probably await.

Contrary to arguments made by Kate Harding in The Washington Post recently, Franken’s resignation would not harm the Democratic Party. In fact it would do the party a lot of good. Minnesota’s Democratic governor will almost certainly appoint a Democrat to replace Franken. Franken barely won his seat in 2008, but handily won re-election in 2014, and the seat is now considered safe for the party.

That may change, however, if an alleged serial groper stubbornly clings to power. The Democratic base has less tolerance for this than the Republican base, which in Alabama at least still backs Moore in disturbing numbers. Franken has now twice claimed that he can’t remember the behavior described by his accusers. “I take thousands of photos at the state fair surrounded by hundreds of people, and I certainly don’t remember taking this picture,” Franken said in a statement. “I feel badly that Ms. Menz came away from our interaction feeling disrespected.”

Franken inflicts harm on his party every day he stays in office. He damages its image as the party of legitimate opposition. He potentially risks turnout and candidate recruitment, which are both dependent on the enthusiasm of the base—a base that is principally angry that Donald Trump, himself accused of sexual harassment and assault, is in power. For the good of the party, and out of respect for Menz and Tweeden, Franken should step down.