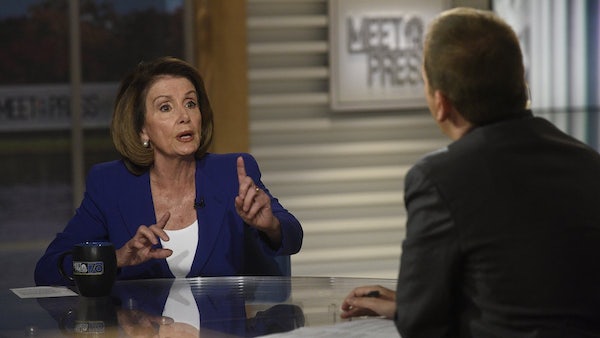 Is the Democratic Party bungling the post-Weinstein moment?

Appearing on Meet The Press on Sunday, Nancy Pelosi hemmed and hawed when Chuck Todd pressed her on the fate of Representative John Conyers, who had settled a wrongful termination case involving sexual harassment. She claimed that her caucus had a “zero tolerance” policy when it comes to sexual harassment, but refused to say that Conyers should step down. She questioned the trustworthiness of Conyers’s accusers: “I do not know who they are. Do you?” she asked the host. “They have not really come forward.” She said Conyers was entitled to “due process,” even though he had already settled the claim. She praised him as an “icon” and vigorously defended his record. Although Conyers later announced that he was stepping down as the ranking member on the House Judiciary Committee, that was beyond what Pelosi was willing to call for.

Pelosi was behaving like a typical party leader, defending a powerful, experienced member of her caucus. In normal circumstances, it’s exactly what you’d expect her to do. But these are not normal circumstances—which Pelosi herself acknowledged at the start of her interview. “I think that something wonderful is happening now, very credible,” Pelosi said. “It’s 100 years, almost 100 years, since women got the right to vote. Here we are, almost 100 years later, and something very transformative is happening. That is, women are saying, ‘Zero tolerance, no more, and we’re going to speak out on it.’ It’s so wholesome, so refreshing, so different.” If only she had stuck to that sentiment for the entirety of her interview.