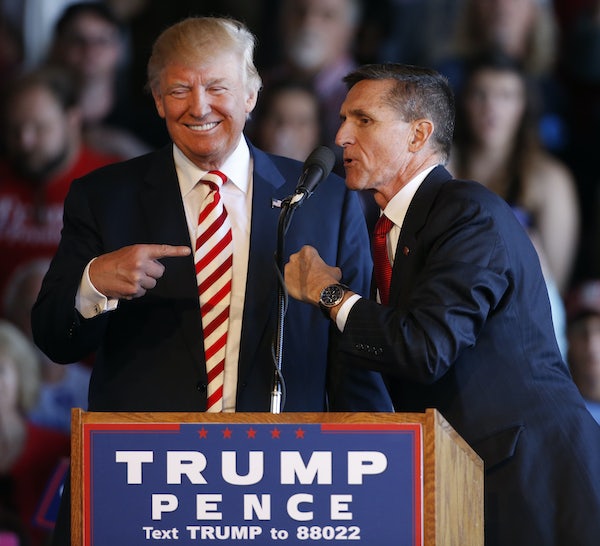 With Michael Flynn’s guilty plea, the walls are closing in on Donald Trump.

Flynn, who served as national security advisor for the first month of Trump’s presidency, has been charged with lying to the FBI and is expected to plead guilty. The indictment alleges that Flynn “willfully and knowingly” made “false, fictitious, and fraudulent statements” about his conversations with the Russian Ambassador to the U.S. Sergey Kislyak during the presidential transition. He is the fourth person to have been charged as part of special counsel Robert Mueller’s investigation into Russian interference in the 2016 election.

Flynn is getting off easy, given the number of potential crimes he could be charged with. Flynn registered as a foreign agent in March of 2017, after it was revealed that he had hidden the fact that he had received large sums of money from the Turkish government; failing to register is a felony. It also has been reported that Flynn and his son attended a meeting with Turkish representatives during which a plot to kidnap the cleric Fethullah Gulen, who lives in Pennsylvania, was discussed. Flynn also may have broken the law in 2015, when the former general failed to receive prior approval for a large speaking fee from Russia. All of this suggests that Flynn—who is reportedly concerned about his son being indicted by Mueller—has flipped.

Flynn is essentially getting the same treatment that Trump adviser George Papadopoulos got from Mueller. There is one important difference, however. Trump and other campaign officials have denied that Papadopoulos was involved in high-level campaign decisions. In contrast, there is no level of plausible deniability when it comes to Flynn, who led “Lock her up” chants at the 2016 Republican National Convention, was a top campaign official, and belonged to the president’s cabinet.

If Flynn has flipped, that suggests he has the goods on other high-level Trump campaign officials, possibly including Jared Kushner, Donald Trump Jr., and the president himself.