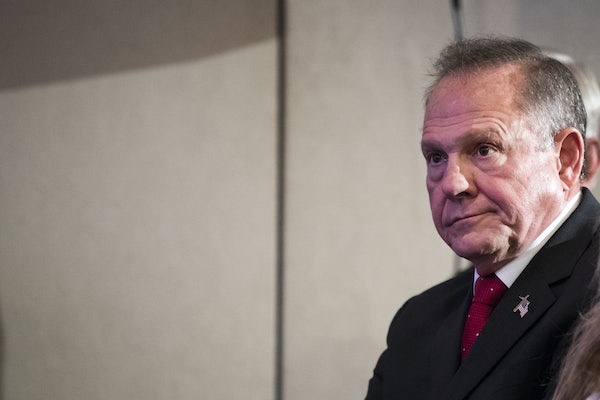 Donald Trump and Roy Moore, together at last.

Waiting for Trump’s endorsement of Moore has been like watching a gritty reboot of The Notebook. You know they’re going to get together, even if you don’t know precisely how it’s going to happen. So Trump’s tweets this morning provided a certain catharsis:

Moore, who has been at the forefront of the right’s grievance politics, was always the Trumpian candidate in the Republican primary race for Alabama’s senate seat, despite Trump’s endorsement of Luther Strange. That candidacy remains viable despite multiple, credible allegations of sexual misconduct with children, and perhaps Moore owes Trump some gratitude. A recent CBS News poll of Alabama Republicans shows that 71 percent of them believe that the allegations are false. Compare this to similar numbers for Trump, who also faces numerous allegations of sexual misconduct, and we can see a pattern. These allegations don’t sway Republican voters, at least not the way they sway Democrats; according to a Politico/MorningConsult poll, 65 percent of Democrats say they believe Bill Clinton’s guilty of sexual misconduct. American politics is deeply polarized, but that polarization is not symmetric.