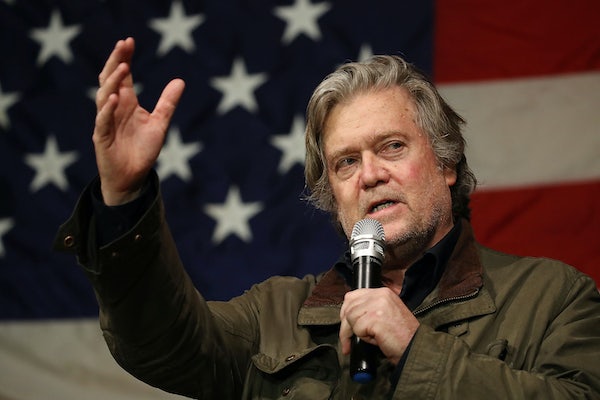 By attacking Mitt Romney, Steve Bannon is gearing up for 2020.

The former presidential adviser joined a rally in Fairhope, Alabama, to support embattled Senate candidate Roy Moore. But even as he ostensibly championed Moore, it was clear that Bannon’s real focus was lambasting the former Republican presidential candidate. Romney was a fair target, given his criticism of Moore. On Tuesday, Romney made his opposition to Moore’s candidacy all too clear in a tweet:

But Bannon’s vitriol against Romney was out of proportion with Romney’s criticism of Moore. Bannon went after Romney’s failure to serve in the military during the Vietnam War and also savaged Romney’s Mormonism and his family.

“Mitt, here’s how it is, brother: The college deferments, we can debate that—but you hid behind your religion,” Bannon said.  “You went to France to be a missionary while guys were dying in rice paddies in Vietnam. You had five sons, not one day of service in Afghanistan and Iraq. ... Where were the Romneys during those wars?” Bannon also said that Moore “has more honor and integrity in a pinkie finger than your family has in its whole DNA.”

Romney is reportedly thinking of running for the Senate in 2018, if sitting Senator Orrin Hatch of Utah retires. The Senate bid could be a preparation for launching a primary challenge against Donald Trump in 2020. Bannon’s acrimonious attack could easily be seen as being motivated not just by a desire to win in Alabama and to attack the loathed establishment, but also to preemptively undercut a potential threat to the Trump presidency.

For his part, Moore’s rival Doug Jones used Bannon’s intervention to portray his opponent as un-Alabaman.