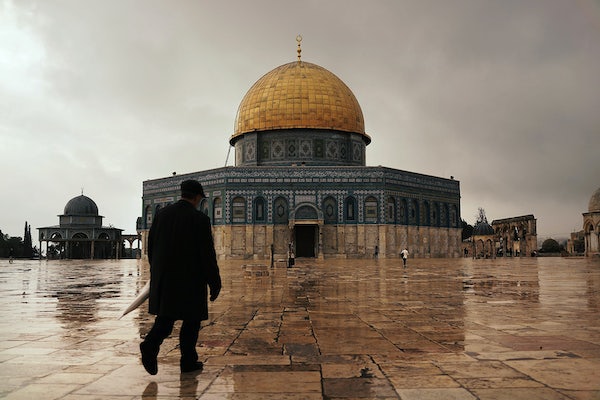 The politics of the Middle East peace process is shifting in favor of Israel.

Donald Trump is expected to announce that he plans to recognize Jerusalem as Israel’s capital on Wednesday. The decision is, in some ways, a compromise. Trump had previously pledged to move the United States embassy to Jerusalem, a decision that would have set off an even greater international firestorm. The administration has insisted that it still plans to move the embassy to Jerusalem, but Trump will sign another six-month waiver, meaning that no change is imminent.

Still, the decision has been met with predictable criticism. Pope Francis called on the United States to respect the status quo in Jerusalem, which both the Israelis and Palestinians claim as their capital. The U.S. has historically insisted that Jerusalem’s status be resolved in peace talks; endorsing Jerusalem as Israel’s “undivided” capital will likely poison the well before talks have even begun. (West Jerusalem is predominantly Israeli, while East Jerusalem is largely Palestinian; pushes for a Palestinian state have typically called for East Jerusalem to be the capital of such a state.) Manuel Hassassian, the Palestinian representative to the U.K., told the BBC that recognition of Jerusalem as Israel’s capital would be the “kiss of death” to the peace process. Violent protests are expected in response.

The decision comes amidst a broader shift in Middle East politics. The New York Times reported on Sunday that Saudi Crown Prince Mohammed bin Salman presented Mahmoud Abbas, the head of the Palestinian Authority, with a peace plan “that would be more tilted toward the Israelis than any ever embraced by the American government.” Per the Times:

The Saudis have denied the contents of the report. But with both Saudi Arabia and the United States growing closer to Israel, it’s becoming increasingly doubtful that Trump will uphold his previous pledge to be a fair broker in negotiations between the Israelis and Palestinians.