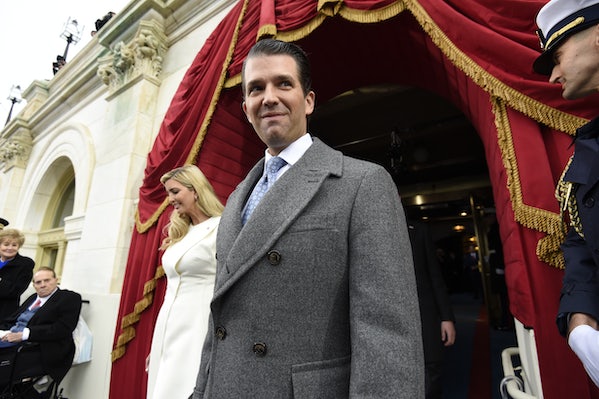 It’s weird how Trump’s campaign seems to have all these ties to WikiLeaks.

CNN is reporting that Donald Trump, his son Donald Trump Jr., and others in the Trump campaign received emails in September of 2016 “offering a decryption key and website address for hacked WikiLeaks documents.” The email preceded both the release of John Podesta’s hacked emails—which were made public hours after the Access Hollywood tape was published by The Washington Post—and WikiLeaks’s overtures to Trump Jr. over Twitter direct message.

It’s a careful story. The overture was sent by “Mike Erickson,” who congressional investigators have been unable to identify. It’s not clear if this was a serious solicitation, or something more banal. But the very existence of this communication is significant in and of itself: It’s yet another example of contact between the Trump campaign and WikiLeaks, and yet another example of the Trump campaign taking, at best, a passive approach to Russian interference on their behalf.

It’s another brick in the wall, in other words. Donald Trump Jr. said he had “no recollection” of the email earlier this week. But these excuses beggar belief. The Trump campaign was repeatedly in contact with WikiLeaks and other individuals with ties to Russia’s government and intelligence apparatus. In every instance, the high-ranking campaign officials involved have denied wrongdoing. But in aggregate, these instances portray a Trump campaign that was, if not actively colluding with Russia, happy to allow Russia and WikiLeaks do their dirty work.

Update: The Washington Post reports that CNN messed up. Looks like the email was by WikiLeaks after the Podesta dump, and led to those emails. Still, it doesn’t change the fact that Donald Trump Jr. and WikiLeaks were in a fair amount of contact.