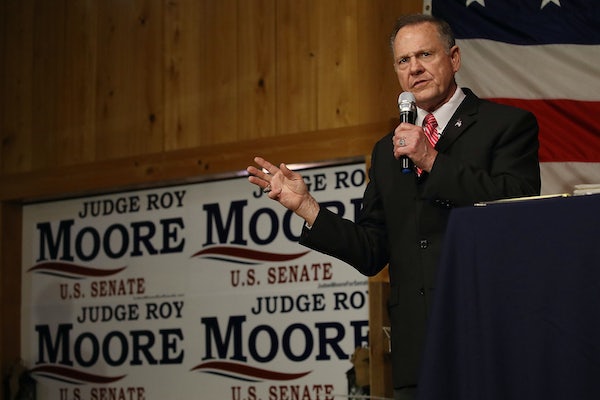 The stakes of the Roy Moore campaign are about so much more than sexual misconduct.

Tuesday’s special Senate election in Alabama has understandably revolved around the allegations against the Republican nominee, yet the final days of this race are an important reminder that there’s even more on the line than whether Alabamans will send an alleged child molester to Capitol Hill.

Doug Jones, Moore’s Democratic opponent, is counting on high black turnout to win on Tuesday. As The New York Times reported, his campaign is running ads on black radio stations noting how Moore is “backed by the racist alt-right groups” and calling him “a birther, still insisting that Barack Obama was born in Kenya and isn’t an American.” Moore allies responded with a racist counter-attack:

Moore, a former state judge supported by President Donald Trump and the Republican National Committee, holds many beliefs that should disqualify him from office. As The Washington Post recounted last week, he thinks homosexuality should be illegal. He disbelieves evolution and has tied it to crime. He wrote that Keith Ellison shouldn’t be allowed to serve in Congress because he’s a Muslim. And in September, when asked when America was last great, he said, “I think it was great at the time when families were united—even though we had slavery—they cared for one another.”

Much of what hangs in the balance for Alabamans on Tuesday hasn’t even factored in this race. On Saturday, the Times reported that the “sensational” parts of this Senate race have “overshadowed the myriad problems in one of the nation’s poorest states. And as voters prepare to cast their ballots, they often lament the issues that have fallen outside the spotlight’s glare during the nationally watched campaign”:

About 17 percent of Alabamians live in poverty — the fifth-highest rate in the country — and the state’s violence-wracked prisons are jammed to 159 percent of their intended capacity. With budget troubles a chronic fact of life, spending on Medicaid, which has not been expanded, lags. Standardized test scores are among the nation’s lowest. Heart disease and diabetes are endemic.

The lack of debate about these issues is further evidence of how Moore has debased this election, and is hurting the very people he’s running to represent.