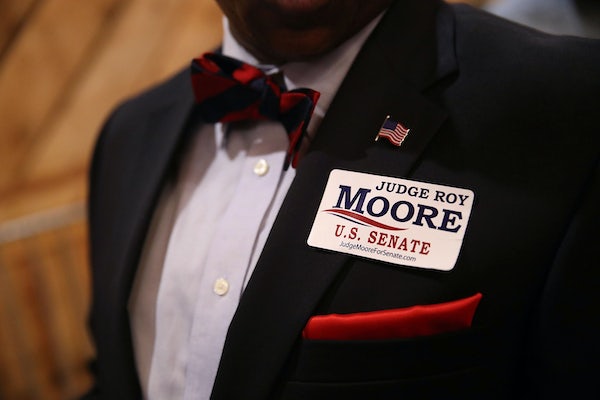 On the eve of the senatorial election in Alabama, Moore gathered together some of the strangest endorsements in political history. Steve Bannon used the occasion to pour fuel into the flames of Republican internal strife by attacking the GOP establishment for betraying Moore. Bannon asserted that “there’s a special place in hell” for those who fail to back Moore, echoing Ivanka Trump’s line that “there is a special place in hell for those who prey on children” in response to allegations that Moore is a child molester.

Seeking to rebut criticism that Moore evoked anti-Semitic stereotypes when attacking billionaire philanthropist George Soros, Kayla Moore, the candidate’s wife, made the unfortunate comment that “one of our attorneys is a Jew.” It wasn’t just the use of the classic “some of my best friends are....” deflection, but also the way Kayla Moore lingered over the word “Jew.”

Finally, an old friend of Moore’s named Bill Sailing, who served with the candidate in the military during the Vietnam War, told a story of how during their military service they, along with a third unnamed soldier, accidentally went into a brothel that had child prostitutes. “There were certainly pretty girls,” Sailing recalled. “And they were girls. They were young. Some were very young.” The point of the story was that Moore and Sailing didn’t use the services of the child sex workers at that brothel, leaving their third friend there. “He’s honorable,” Sailing said of Moore. “He’s disciplined. Morally straight.” But as journalist Jill Filipovic correctly noted, the story suggests that Sailing and Moore let their military buddy stay in the brothel and possibly use the services of the “very young” girls there.