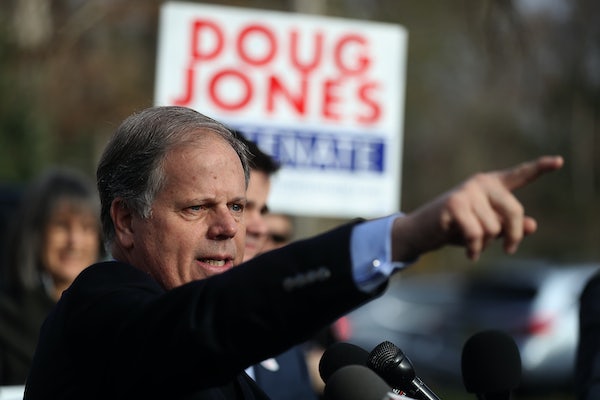 Democrat Doug Jones was elected to the U.S. Senate on Tuesday, as Alabama voters rejected Republican nominee Roy Moore, a political extremist and credibly accused child molester. Jones’s win is a crushing defeat for the president, who emerged as Moore’s biggest cheerleader in the final days of the campaign, and for Republicans in the Senate, whose margin in the chamber has narrowed to 51-49.

This is an unthinkable victory for progressives. If a pro-choice liberal like Jones can win in Alabama, one of the reddest states in the country, there’s no telling what Democrats can achieve in the 2018 midterm elections. While most if not all GOP candidates next year won’t have baggage as severe as Moore’s, they will be saddled with the tarnished brand of a party led by an accused sexual harasser.

Jones is proof that Democrats can compete and win anywhere, and that the backlash against Trump is massive and growing. But his win is also a triumph for the state of Alabama, which gave the nation Attorney General Jeff Sessions and George Wallace. But in this crucial moment, in defiance of history, voters elected a deeply good man who successfully prosecuted Ku Klux Klan members who murdered four black girls in the Birmingham church bombing of 1963. It’s unquestionably the Trump resistance’s biggest victory yet.