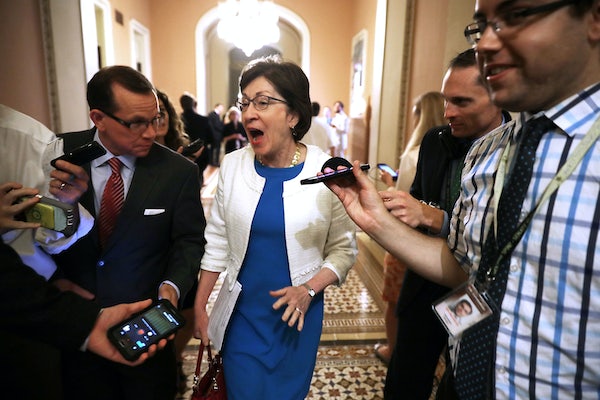 Does Susan Collins care if the tax bill is bad?

Activists perceive Maine’s Republican senator to be one of the more independently-minded members of her party, but a New York Times report on Thursday says they’ve been unable to change her vote on the GOP’s highly regressive tax bill. Collins believes she’s secured the concessions she’s requested from party leadership—including provisions to stabilize individual insurance markets and bar automatic Medicare cuts—though Speaker Paul Ryan seems to disagree. That disparity, however, hasn’t deterred her from supporting the bill—and neither have the personal stories of activists with disabilities and residents of her own state:

“If Senator Collins actually saw you as a human, saw me as a human, then she wouldn’t pass any of this,” said Ady Barkan, a member of the Center for Popular Democracy, who recently learned he had amyotrophic lateral sclerosis, or A.L.S., and uses a wheelchair.

Barkan previously confronted another supposed Republican maverick, Jeff Flake, on an airplane, in a video that went viral. As forms of direct action, Barkan’s impromptu confrontations sit neatly within the activist repertoire popularized by groups like ADAPT. The goal is to force senators like Collins to acknowledge the implications of their votes, to admit that the stakes are life and death. The tax bill is not only sweepingly regressive, all but guaranteeing that cuts to the social safety net will follow, but will also wreak havoc in insurance markets, causing premiums to rise.

Unfortunately, it looks like the hope that Collins will play savior is misplaced. Collins, who stood firm against the GOP’s attempts to repeal Obamacare, has been portrayed as the rare Republican who cares about health care. But throw massive tax cuts for corporations into the mix, and she very quickly starts acting just like her colleagues.