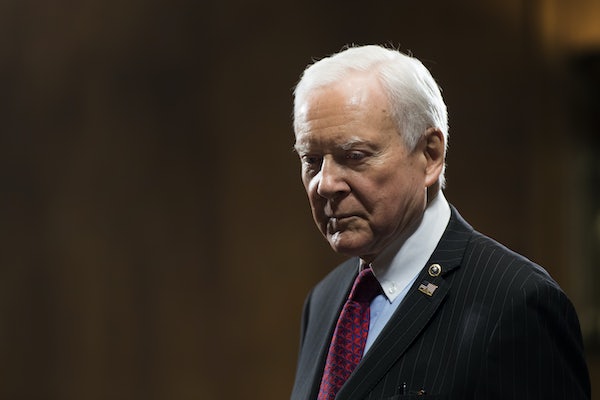 On Monday, the 83-year-old Republican senator from Utah was named “Utahn of the Year” by The Salt Lake Tribune, the state’s largest daily newspaper. Hatch celebrated the news on Twitter, while also suggesting that the state’s lieutenant governor, Spencer Cox, and Utah Jazz star Rudy Gobert were deserving of the honor:

It would appear that Hatch did not read the paper’s accompanying editorial, in which the Tribune explained that this annual designation is for the person who has “had the biggest impact. For good or for ill.” The editors then made clear that, in Hatch’s case, it was for ill:

The selection of Sen. Orrin G. Hatch as the 2017 Utahn of the Year has little to do with the fact that, after 42 years, he is the longest-serving Republican senator in U.S. history, that he has been a senator from Utah longer than three-fifths of the state’s population has been alive.

It has everything to do with recognizing:

—Hatch’s part in the dramatic dismantling of the Bears Ears and Grand Staircase-Escalante national monuments.

—His role as chairman of the Senate Finance Committee in passing a major overhaul of the nation’s tax code.

—His utter lack of integrity that rises from his unquenchable thirst for power.

It’s possible that Hatch only read an accompanying straight news article about his selection, which noted Hatch’s “big wins” in 2017: his role in shrinking two national monuments in Utah, pushing through the Republican tax bill, and eliminating Obamacare’s individual mandate. “This is pretty hard to beat, I have to admit,” Hatch told the paper about the year he’d had.

The Tribune’s editorial board, however, used those “wins” to make a case for Hatch to retire. “It would be good for Utah if Hatch, having finally caught the Great White Whale of tax reform, were to call it a career,” it read. “If he doesn’t, the voters should end it for him.”

Update: Hatch spokesman Matt Whitlock said in an email that his boss’ tweet “was tongue-in-cheek,” adding, “Everyone celebrates Christmas differently. We all sincerely hope the members of the Salt Lake Tribune editorial board find joy this holiday season in something beyond baselessly attacking the service and integrity of someone who given 40 years for the people of Utah, and served as one of the most effective lawmakers of all time.”