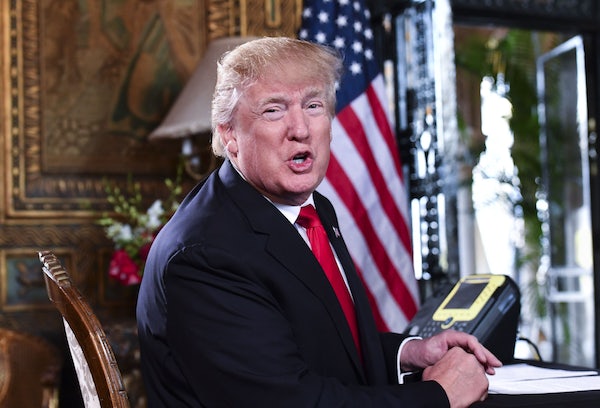 Trump is “back to work,” which means he’s back to watching Fox and Friends and rage-tweeting.

Having saved Christmas, Trump on Monday night tweeted that “tomorrow it’s back to work in order to Make America Great Again (which is happening faster than anyone anticipated)!” True to his word, he was back to his old self on Tuesday morning, tweeting misinformation about Obamacare and the Russia investigation.

The GOP tax reform did not repeal Obamacare, as Trump has repeatedly claimed since the bill’s passage. The Affordable Care Act is still a law. The bill does zero out the penalty for failing to sign up, which may result in fewer people covered and higher premiums. But the individual mandate is just one part of a huge and complex law that includes Medicaid expansion, subsidies for people who buy coverage on the Obamacare exchanges, and strict coverage requirements for insurers. It will take a lot more than a weakened individual mandate to effectively repeal Obamacare.

Trump followed the above tweet with yet more falsehoods:

The Steele Dossier was not, as Trump claims, the basis for investigating potential collusion between his campaign and Russia during last year’s presidential campaign. The FBI has been investigating those possible ties since the summer of 2016. The dossier, which was published by BuzzFeed in January and remains largely unverified, did provide a roadmap for the FBI’s investigation, resulting in guilty pleas from former Trump campaign advisers Paul Manafort and Michael Flynn.

But Trump may have an ulterior motive in misrepresenting the origins of the investigation. Republicans are publicly trying to discredit Mueller’s investigation, and a “group of House Republicans has gathered secretly for weeks in the Capitol in an effort to build a case that senior leaders of the Justice Department and FBI improperly—and perhaps criminally—mishandled the contents” of the Steele dossier, according to Politico. So Trump is really just pushing the party line, one that’s sure to grow even louder in 2018.