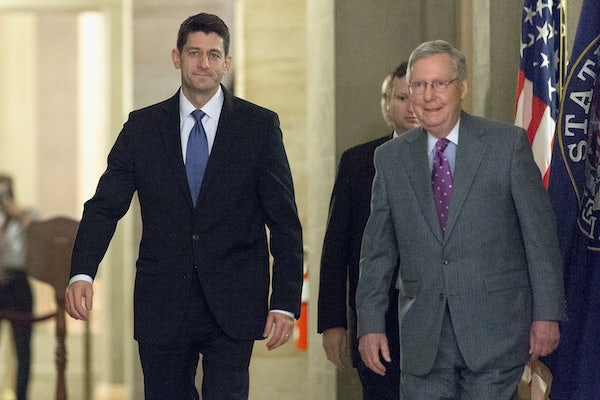 The Republican Party doesn’t know where to go after tax reform.

House Speaker Paul Ryan, having fulfilled one of his long-term goals by passing tax reform, is now after his white whale: entitlement reform. Despite numerous promises not to touch popular programs like Medicare, Medicaid, and Social Security in order to pay for a deficit-busting tax plan, Ryan began laying the groundwork for social spending cuts weeks before President Donald Trump signed the Tax Reform and Jobs Act into law. “We’re going to have to get back next year at entitlement reform, which is how you tackle the debt and the deficit,” Ryan said in early December. “Frankly, it’s the health care entitlements that are the big drivers of our debt, so we spend more time on the health care entitlements—because that’s really where the problem lies, fiscally speaking.”

But other Republican leaders are pumping the breaks. Trump has indicated that he would like to turn to infrastructure, citing the possibility for bipartisan legislation. And Mitch McConnell, Ryan’s counterpart in the Senate, told reporters that entitlement reform will only happen with bipartisan support. “The sensitivity of entitlements is such that you almost have to have a bipartisan agreement in order to achieve a result,” McConnell told reporters last week. A number of Republican senators, including Shelley Moore Capito, Dean Heller, and Jeff Flake either changed the subject when asked about entitlement reform or insisted that it be bipartisan.

There’s simply no way that bipartisan entitlement reform is going to happen. Given the number of narrow party-line votes held in the Senate in 2017, it seems more likely that the insistence on bipartisanship is a polite way of telling Ryan that the issue is too politically sensitive in an election year. Of course, tax reform passed both the House and the Senate on a party-line vote, despite being hugely unpopular.

The division on entitlement reform also points to a larger issue facing the GOP as 2018 approaches: Republicans just aren’t sure what to do next. Some are confident that a bipartisan infrastructure bill is possible, but there is considerable distance between Republican and Democratic proposals—the Republican plan, as it has stood for the last year, essentially amounts to another huge giveaway to corporations. Other Republicans, notably Senator Lindsey Graham, are insisting Republicans return to repealing Obamacare. With tax reform, Republicans were able to present a (more or less) united front. But now that the ink is dry on the tax bill, the party is once again divided.