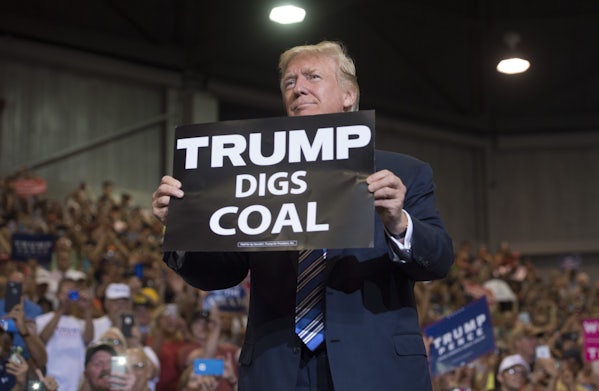 The interviewer, reporter Michael S. Schmidt, did not question Trump’s claims. Trump has started the process of repealing numerous environmental regulations that affect coal’s profitability, and that’s led to an expected short-term increase in coal mining and production jobs. But the coal industry is far from secure in the long term—and is in fact “on life support,” as noted by The Washington Post in October:

[The Trump administration’s] moves to save this industry have actually exposed its weaknesses — and revealed a trend that coal companies and the Trump administration have not acknowledged publicly: The companies are scaling back, in some cases shedding workers and declining the opportunities the federal government now wants to give them. Despite Trump’s best efforts, the American coal industry remains on life support.

Trump’s claim that his policies somehow revived West Virginia is also false. The modest increase in mining jobs since Trump’s election occurred in the Powder River Basin, which runs through Wyoming and Montana. This summer, West Virginia ranked at the very bottom on CNBC’s “Top States for Business” list for the first time. “West Virginia has always been known as a place where people have to work incredibly hard in order to barely get by,” the article reads. “But with the decline of the major source of that work—coal mining—the Mountain State has in many ways become an empty symbol.”

So coal has not been saved, by Trump or anyone else. And the only way to make sure West Virginia is doing “fantastically” is to make sure its economy doesn’t depend on only one, dying industry to survive.