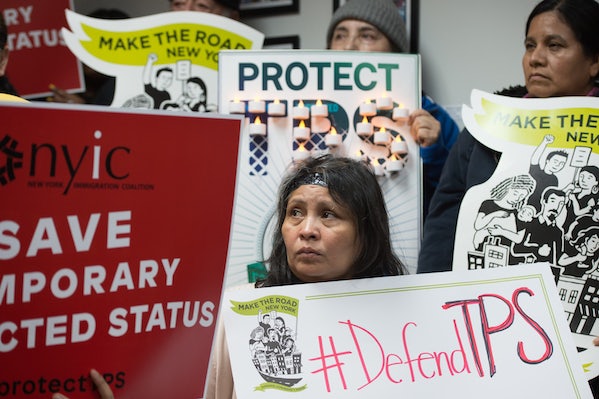 The Trump administration will no longer allow the 200,000 Salvadorans living in the United States under Temporary Protected Status to remain in the country legally, The New York Times reported earlier today. This group fled El Salvador after two massive earthquakes in 2001 left over a thousand people dead and hundreds of thousands homeless. They must now return to a country that is still far from stable. Those who do not leave the U.S. by September 9, 2019, or find an alternative immigration status, will face deportation.

Trump’s decision to rescind protected status for Salvadorans is a continuation of his attack on legal and illegal immigration, particularly those communities benefiting from TPS. It is a humanitarian program that allows those fleeing from war and natural disaster to work and live in the United States without threat of deportation. Those who regularly renew their permits can work legally, and renewal can cost over $450 a pop. The program, which President George H.W. Bush created in 1990, has operated in the United States for nearly three decades.

That is, until the Trump administration lifted TPS designation from Sudan in September of 2017. Two months later, the administration declared that it was ending the TPS designation for Nicaragua, and threatened its end for Honduras as well. And as of of November 20, 2017, Haitians who have lived in the United States since 2010, when a deadly earthquake triggered a large-scale humanitarian crisis, are also no longer covered under TPS.

Though the devastation that can earn a country TPS status might no longer be manifestly evident, infrastructures and economies take longer to heal. Under Barack Obama and George W. Bush, TPS designations were routinely extended in 6-18 month cycles, and could be renewed indefinitely.

Returning to El Salvador would mean returning to a country with few jobs, and where homicide rates have reached “astronomical levels.” And for many TPS beneficiaries who have lived in the U.S. for over a decade, deportation would mean returning to a country that is no longer home. “There is nothing to go back to in El Salvador,” Salvadoran TPS beneficiary Veronica Lagunas told the Times. “The infrastructure may be better now, but the country is in no condition to receive us.”