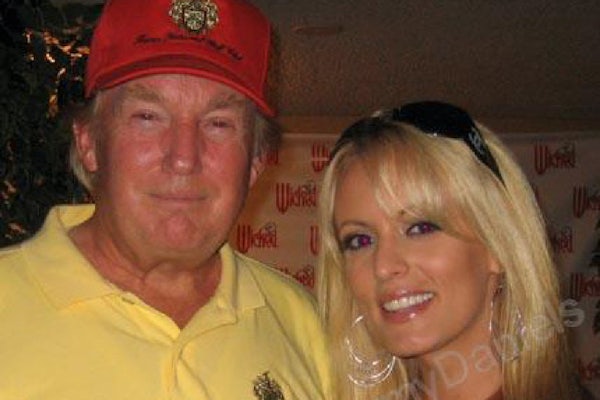 Myspace, via The Wall Street Journal

Donald Trump is going to end this week with a report that an adult film star was paid off to keep quiet about their affair.

One month before the 2016 election, Stephanie Clifford, also known by her stage name Stormy Daniels, was paid $130,000 in hush money as part of a non-disclosure agreement that barred her from speaking about a 2006 sexual encounter with Trump, according to a Wall Street Journal report published Friday afternoon.

The alleged encounter occurred at a Lake Tahoe celebrity golf tournament, over a year after Trump married Melania Trump. Back in October 2016, adult film star Jessica Drake came forward at a news conference and alleged that Trump had kissed her without consent at the same 2006 golf tournament.

Michael Cohen, the longtime Trump lawyer who reportedly arranged the $130,000 transaction said in a statement to the Journal, “President Trump once again vehemently denies any such occurrence as has Ms. Daniels.” He also attached a statement signed by “Stormy Daniels” denying that an affair had taken place and that she had received hush money. The Journal reported that Clifford did not respond to requests for comment.

Although there is no evidence that this alleged encounter was non-consensual, the agreement reportedly was reached as then-candidate Trump was facing a deluge of sexual assault allegations. In October 2016, the infamous Access Hollywood footage was released, in which Trump admitted to groping women without their consent.