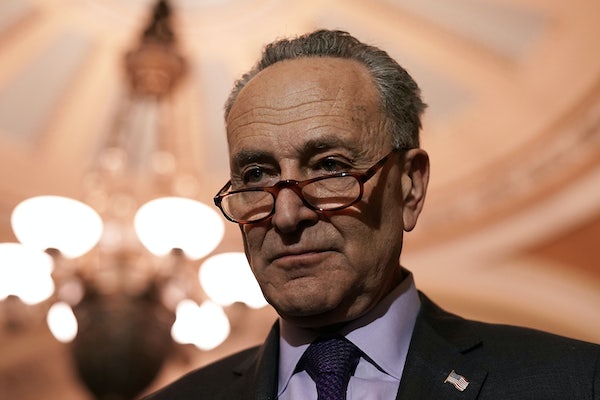 What was the point of the government shutdown?

On Monday afternoon, the Senate voted 81-18 to fund the government through February 8, ending a shutdown that had lasted only three days. Democrats traded a vote to reopen the government in exchange for a six-year authorization of CHIP and a commitment from Senate Majority Leader Mitch McConnell to hold a vote on DACA before that deadline. In a speech announcing his vote, Democratic leader Chuck Schumer warned McConnell not to pull any tricks over the next 17 days.

“The bipartisan group, in a very fine way, filled the glaring absence of the president in these talks,” Schumer said. “I expect the majority leader to fulfill his commitment to the Senate, to me, and to the bipartisan group, and abide by this agreement. If he does not, of course, and I expect he will, he will have breached the trust of not only the Democratic senators but members of his own party as well.”

Democrats are hoping this is a win-win. The Senate will either hold a vote on DACA or it will not. If it does hold a vote on DACA, House Republicans will be forced to consider the Senate’s bill, as Democrats can’t be expected to support the Republican-controlled House’s more conservative alternative. If Paul Ryan decides not to hold a vote on that bill, that could lead to another government shutdown—which would be more easily blamed on Republicans. As Democrats see it, either the legal status of the DREAMers is resolved in the next three weeks or they head in to a second shutdown with greater leverage.

But that is all very hopeful. McConnell, after all, promised Jeff Flake that he would hold a vote on DACA in exchange for Flake’s vote in favor of tax reform—a promise he hasn’t kept so far. There is no reason to believe he’ll keep his word this time, especially since every time Republicans have a chance to pass legislation to protect the DREAMers, they have chosen not to. Furthermore, the White House is saying there will be no deal on DACA.

For the moment, at least, Democrats appear to have squandered a three-day shutdown and the leverage it provided. Their base is understandably furious that they’ve once again left DREAMers in legal limbo. All of this changes if Democrats can pin Trump, Ryan, and McConnell to the wall and force a vote on DACA. But there’s no reason to feel hopeful that will happen in the next 17 days.