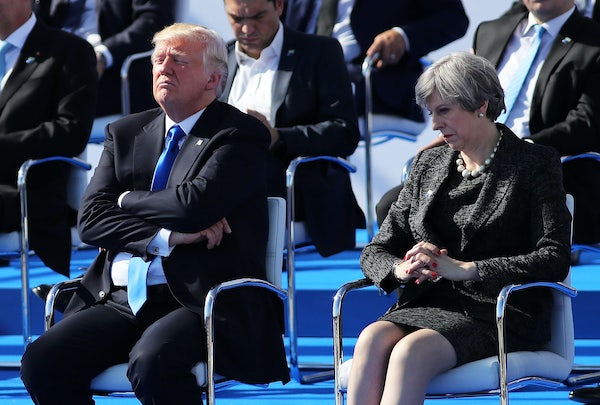 Donald Trump is afraid of the British press.

Bloomberg Politics reported a variety of embarrassing details on Wednesday about Trump’s dysfunctional relationship with British Prime Minister Theresa May. The two have “clashed repeatedly in public—over intelligence leaks after a terrorist attack in Manchester, the Iran nuclear deal, and most dramatically after the president tweeted a message from a British far-right anti-Muslim campaigner.” But the dynamic is apparently even worse behind the scenes, as the prime minister can’t get a word in edgewise during calls with the president:

May finds it almost impossible to make headway and get her points across, one person familiar with the matter said. Trump totally dominates the discussion, leaving the prime minister with five or ten seconds to speak before he interrupts and launches into another monologue.

Ignorant presidential mansplaining would be bad enough, but the most mortifying nugget in Bloomberg’s piece is how the president reportedly refused to make a trip across the pond because journalists in the United Kingdom were mean to him:

In one phone conversation during 2017, Trump complained to May over the criticism he’d been getting in British newspapers. Amid warnings that Trump would face protests in the streets when he arrived, he told the prime minister he would not be coming to the U.K. until she could promise him a warm welcome.

May responded to say such treatment was simply the way the British press operate, and there wasn’t much she could do. In the secure bunker underneath the prime minister’s office, her advisers listened in to the call in astonishment at Trump’s demand.

Britain has a standing offer to host Trump for an official state visit, but it sounds like neither the White House nor 10 Downing will be crushed if it doesn’t come together.