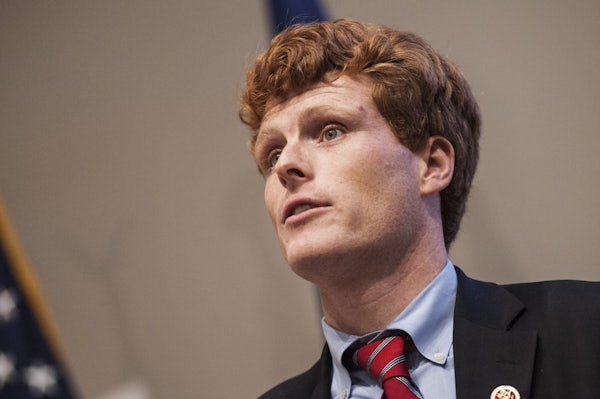 The Democratic Party has chosen the 37-year-old Massachusetts congressman and grandson of Robert Kennedy to deliver the official response to President Donald Trump’s first State of the Union address on Tuesday, and some progressives are displeased. “Kennedy is an establishment pick, which is tone deaf after the 2016 rejection of the Bush and Clinton dynasty,” a Democratic lawmaker told The Wall Street Journal. Marissa Barrow, a spokeswoman for the Progressive Change Campaign Committee, told the paper that Kennedy must now choose between representing the establishment and being “a star for the ascendant Elizabeth Warren wing of American politics that unites voters of all political stripes around a vision of fighting for working people to have better lives.” (Incidentally, Kennedy met his wife in Warren’s class at Harvard Law School.)

But as the Journal noted, lefty apprehension about Kennedy stems from more than just his privileged pedigree. “Kennedy has stood with Democrats in opposition to Mr. Trump’s policies,” the paper reported, “but he didn’t join 120 of his Democratic colleagues last year in signing onto a Medicare-for-all bill and has voted against marijuana legalization.”

In an opinion piece he co-wrote for The Washington Post last March, Patrick Kennedy cast much of the pro-pot movement as driven by a profit motive:

Certainly, we shouldn’t lock people up for marijuana use or low-level offenses, or revert to a “Reefer Madness”-style war on drugs. But we should also recognize legalization for what it is: the large-scale commercialization and marketing of an addictive — and therefore highly profitable — substance.

Many marijuana advocates have one goal in mind: to get rich. What we need, therefore, is a federal enforcement strategy that not only promotes human rights and social justice, but also actively targets and deters the special interests driving Big Marijuana.

Polling shows these Kennedys are increasingly out of step with the 60 percent of Americans who support legalizing marijuana. The Washington Post reports that several prominent progressives giving unofficial responses to the State of the Union “are to Kennedy’s left on a few issues, such as marijuana legalization,” including Vermont Senator Bernie Sanders, California Congresswoman Maxine Waters, and former Maryland Congresswoman Donna Edwards. (The Trump administration is waging a war against legal pot.)

Which isn’t to say the marijuana issue should come up on Tuesday night. “I’m just hoping I can make it on and off the stage without tripping, dehydrating or ruining my career. And that my six-week-old son will let me sleep for a couple hours tonight,“ Kennedy said in a statement to the Journal on Monday. “On a serious note, I’m grateful for the privilege and focused on offering the country a compelling alternative to President Trump’s agenda.” On pot, though, Kennedy’s not much of an alternative.