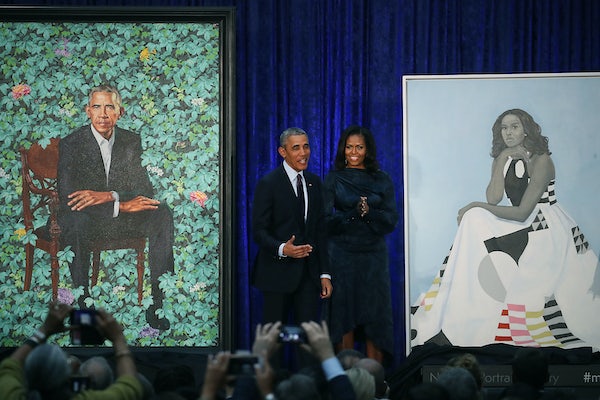 The new Obama portraits are gorgeous alone, but combine strangely.

The official portraits of Barack and Michelle Obama were unveiled today at the National Portrait Gallery. Amy Sherald painted Michelle, and Kehinde Wiley took on Barack. Both portraits are large-scale and make important use of color in framing each subject. Their palettes do not blend well together side by side, but as individual portraits, each painting is a great achievement.

Both painters are African American, and both are known for working with African American subjects. Wiley’s style is to place his subject against a busy, patterned background. Those backgrounds have a wallpaper-like repetition to them, and they have the effect of elevating the person in the foreground into a kind of icon. The skin of a Kehinde Wiley subject tends to glow as if reflecting a strong light source.

The Obama portrait is a good example of the style. The president is seated against a backdrop of foliage, dotted with flowers that symbolize the subject’s rich heritage: jasmine for Hawaii, blue lilies for Kenya, chrysanthemums for Chicago. The leaves twine around his feet, compromising the foreground/background distinction with a playful decorativeness that nonetheless feels organic. Especially during his second term, Obama was often photographed as a tired man. Wiley has given him a bright face and a portrait full of life and energy.

Sherald’s subjects are not as bright as Wiley’s, either in skin tone or in light source. She tends to paint human skin with a mutedness that approaches grayscale. That fading of the skin makes her subjects seem dreamy, almost mythological, as opposed to Wiley’s iconicity. But her portraits often also feature big pops of color in her subject’s clothing, and flat—also dreamlike—backgrounds.

It’s a shame that, side by side, Kehinde Wiley’s vivid style makes Sherald’s portrait look especially quiet. If I had to choose, I’d say that Sherald’s vision of Michelle Obama is the slightly better work. The pose and the placement of the hands expresses a gestural sense of the subject’s self that flows right into the dress: Michelle Obama is a  wearer of clothes and an owner of arms and a woman who looks right at you, this painting says.

Both paintings use backgrounds that are abstracted away from the subjects, and so each painting does place their respective Obama into the canonical space of history (rather than some specific room). But neither is overly serious. Neither is bogged down by the pressure and duty of the occasion, instead rising to it with joy and personality. I just hope they don’t hang them side by side.