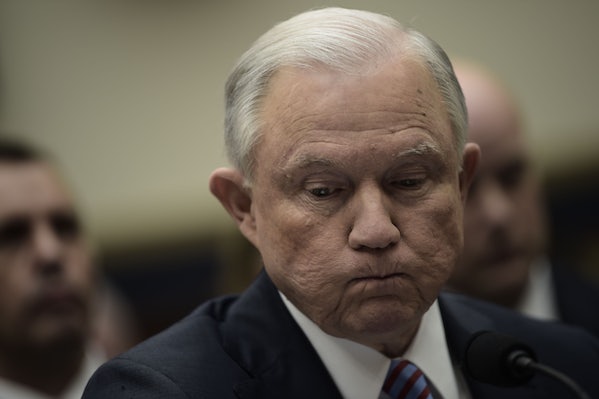 The attorney general received some attention on Monday for referencing “the Anglo-American heritage of law enforcement” during a speech to the National Sheriffs’ Association. CNN and The Daily Beast took note of the phrase without drawing any conclusions, while other outlets made their point more clearly. Splinter’s Emma Roller, for example, concluded that Sessions “let his racism peek through a little more than he may have intended to.”

The quote wasn’t included in Sessions’s prepared remarks, where he describes the sheriff’s historical origins and community role as part of “our legal heritage.”

I want to close by reiterating my deep appreciation and profound thanks to all the women and men of law enforcement—federal, state, local, and tribal.  I want to thank every sheriff in America. Since our founding, the independently elected Sheriff has been seen as the people’s protector, who keeps law enforcement close to and amenable to the people. The Sheriff is a critical part of our legal heritage.﻿

Sessions deviated from that phrasing in the speech he actually gave, largely by substituting in “Anglo-American” and more forcefully defending the institution itself.

Since the founding, the independently elected sheriff has been the people’s protector, who keeps law enforcement close to and accountable to people—to the elected process. The office of sheriff is a critical part of the Anglo-American heritage of law enforcement. We must never erode this historic office.

Some observers took “the Anglo-American heritage of law enforcement” to be a reference to officers’ ethnic heritage. But the context of his speech suggests it was a clumsy reference to the American criminal-justice system’s cultural heritage.

Sheriffs, for example, can be traced back to the medieval English institution of the same name. Even after independence, early Americans continued to draw upon English common law and initially kept colonial institutions of justice intact. Judges and lawyers frequently note this continuity and its impact on modern American law. Justice Anthony Kennedy’s habit of writing in sweeping phrases makes him especially prone to this. He’s invoked the “Anglo-American legal tradition” in matters ranging from a 2006 dispute about the duress defense in criminal law to a 2011 case about the First Amendment’s Petitions Clause.

But Kennedy is hardly alone. Justice Samuel Alito complained in a 2013 dissent that the majority’s decision was “based on a putative rule of trespass law that is nowhere to be found in the annals of Anglo-American jurisprudence.” It’s not just the Court’s conservatives, either. In a 2008 Guantanamo Bay-related case, Justice David Souter wrote a concurring opinion, joined by justices Ruth Bader Ginsburg and John Paul Stevens, that pointedly reminded the decision’s dissenters about “a basic fact of Anglo-American constitutional history” involving habeas corpus.

Sessions’s policy preferences on immigration and criminal justice don’t incline liberals to give him the benefit of the doubt, and understandably so. But in the context of legal history, his choice of words doesn’t necessarily convey racist sentiment—and given his decades of experience in the law, he’s surely familiar with that history.