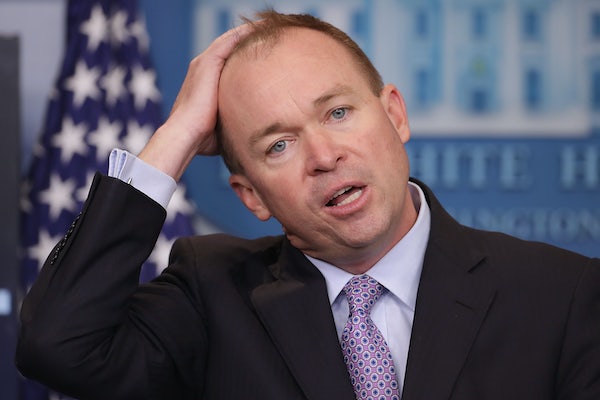 The White House believes poor people don’t deserve to choose what they eat.

Trump’s budget, released on Monday, proposes drastic cuts to the Supplemental Nutritional Assistance Program in addition to a change in the way food aid is delivered to low-income families. The administration’s innovation: Blue Apron, but for poor people.

“What we do is propose that for folks who are on food stamps, part—not all, part—of their benefits come in the actual sort of, and I don’t want to steal somebody’s copyright, but a Blue Apron-type program where you actually receive the food instead of receive the cash,” said Mick Mulvaney, director of the Office of Management and Budget. “It lowers the cost to us because we can buy [at wholesale prices] whereas they have to buy it at retail. It also makes sure they’re getting nutritious food. So we’re pretty excited about that.”

Blue Apron, as The Washington Post points out, costs about $10 per serving, while food stamps provide roughly $1.37 in food per person. Blue Apron also allows customers to choose their meals for the week; the American poor, however, will not enjoy such liberties. Though there are already restrictions on how food stamps may be used, the so-called America’s Harvest Box represents a significantly more restrictive approach to food aid. The SNAP boxes would contain peanut butter, shelf-stable milk, juice, grains, cereals, pasta, and canned beans and meat. No word on what SNAP recipients should do if they have dietary restrictions for medical reasons, or if they keep a religious diet. The boxes also will not contain any fresh fruit or vegetables.

But the White House is less concerned with nutrition than saving money—and in the process, they’ve revealed the truth behind Republican rhetoric about choice and personal liberty. On food stamps, two conservative beliefs combine: The first is that the average poor person is poor because they don’t work, and the second is that personal liberty is a privilege. The America’s Harvest Box proposal implies that SNAP recipients haven’t earned the right to choose their own meals. Talk about a nanny state.