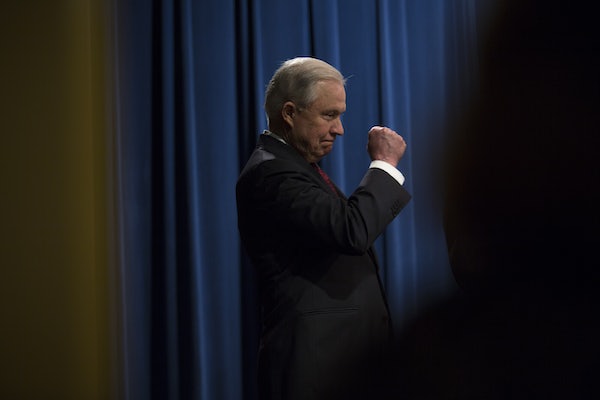 Jeff Sessions rebukes Trump by vowing to act with “integrity and honor.”

That’s according to a rare statement issued by the attorney general on Wednesday afternoon. Normally, it wouldn’t be news when the head of the Justice Department says he or she will faithfully enforce the law. But Sessions is responding to public criticism from a highly unusual source: the president of the United States.

The latest contretemps began on Wednesday morning, when President Donald Trump once again tried to openly pressure Sessions to steer the Justice Department’s investigative functions for the president’s political benefit.

The “potentially massive FISA abuse” to which Trump refers is likely a reference to GOP allegations that the Justice Department and the FBI abused the FISA process to surveil Carter Page, a former Trump campaign aide, as part of the Russia investigation. Those claims surfaced publicly last month in a mostly discredited memo issued by Republicans on the House Intelligence Committee; Democrats released a counter-memo to rebut the allegations last weekend.

Michael Horowitz, the Justice Department’s inspector general, is currently investigating the department’s actions during the 2016 election. The former federal prosecutor is not an “Obama guy,” despite the president’s claims. Barack Obama nominated him to his current post in 2012, but Horowitz has worked in the Justice Department under Democratic and Republican presidents alike. In 2003, George W. Bush nominated him to a six-year term on the U.S. Sentencing Commission. Trump correctly noted that Horowitz isn’t currently a prosecutor, but inspectors general can refer cases for potential charges if they uncover evidence of wrongdoing.

Perhaps because Trump’s latest attack targeted other DOJ employees instead of the attorney general, Sessions issued a rare response. “We have initiated the appropriate process that will ensure complaints against this department will be fully and fairly acted upon if necessary,” he said in a statement. “As long as I am the attorney general, I will continue to discharge my duties with integrity and honor, and this department will continue to do its work in a fair and impartial manner according to the law and Constitution.”

At first glance, the statement is a mundane recitation of Sessions’s professional obligations as both a lawyer and a civil servant. But the deeper implication—that the president is pressuring the attorney general to act unethically—is inescapable.