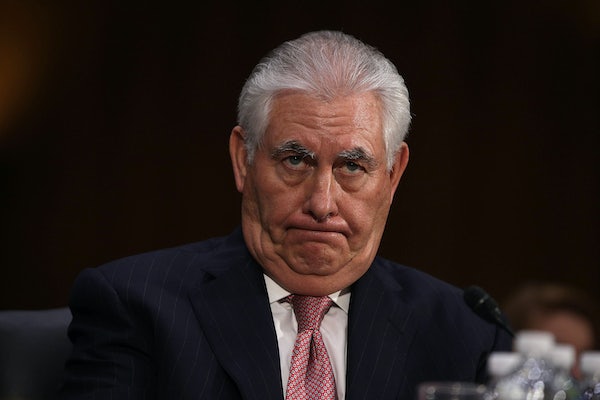 Rex Tillerson just got brutally dumped from the White House.

For the last several months, there have been rumors that President Trump was displeased with his Secretary of State and that he wanted to replace him with CIA Director Mike Pompeo. The White House has repeatedly denied that such a shakeup was in the offing, and Tillerson has repeatedly said that he doesn’t want to leave his job. But on Tuesday morning, Trump tweeted it out.

There is a lot going on here. Tillerson and Trump have never exactly jibed. The two have clashed over the Paris Climate Accords, North Korea, and the decision to move the United States’s embassy in Israel to Jerusalem. Most recently, Tillerson raised eyebrows by laying the blame on Russia for the poisoning of the double agent Sergei Skripal—something that Sarah Huckabee Sanders wouldn’t do.

All of that may be secondary to the fact that Trump has never quite gotten over being called a “fucking moron” by his secretary of state. Tillerson was caught unawares, with the State Department saying he “had every intention of staying. ... The Secretary did not speak to the President and is unaware of the reason.”

Tillerson’s tenure was a disaster, marked by a historic gutting of his department, conflicts with the president that increasingly left him outside of major policy decisions, and a seeming hatred for the job. But perhaps Tillerson’s main problem was that he tried to act like a diplomat in an administration that hates diplomacy.

For those who are concerned about Trump’s erratic temperament, Pompeo and Haspel are alarming choices. Pompeo sees the War on Terror as a clash of civilizations and is a hawk when it comes to Iran. Haspel, meanwhile, played a “direct role” in the CIA’s extraordinary rendition program. With weeks to go before negotiations with North Korea supposedly start, Trump’s national security team just got a lot more hawkish.