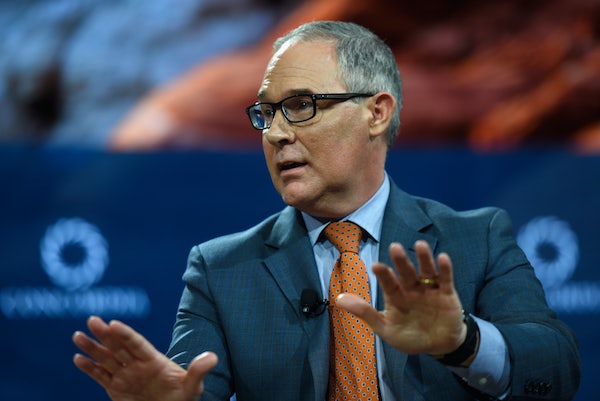 The latest scandal surrounding President Donald Trump’s Environmental Protection Agency administrator has it all: Cheap housing, forceful door-breaking, nepotism, and questions about negotiated bribery. It also has the feature of being fast-moving and a little complicated. It’s worth taking one detail at a time.

On Thursday, ABC News revealed that, for the first six months Pruitt was in D.C., he lived in a fancy Capitol Hill condo co-owned by the wife of top energy lobbyist J. Steven Hart. Hart is chairman of a firm that lobbies for the export of liquefied natural gas. This brought up serious ethical questions, since Pruitt is currently under investigation for using taxpayer money to travel to Morocco for the sole purpose of promoting liquefied natural gas. Critics say Pruitt had no business doing this because it was unrelated to his job of protecting public health and the environment.

Later Thursday, Bloomberg reported on the terms of Pruitt’s lease: $50 per night to stay in one of the bedrooms. In D.C. lingo, that’s known as a gosh-darn steal.

An EPA ethics attorney initially told ABC that, because Pruitt paid for the room, the transaction was allowable. “It was a routine business transaction and permissible even if from a personal friend,” EPA Senior Counsel for Ethics Justina Fugh said. She made her opinion, however, without knowing the next part of the story, which ABC broke on Friday: Pruitt’s adult daughter—a White House intern—lived in the condo, too. Fugh then told Buzzfeed News she needed more information to determine whether the arrangement was ethical.

In the midst of all this, ABC uncovered yet another strange detail. About a year ago, Pruitt’s security detail literally broke down the front door of the fancy energy lobbyist-connected condo, believing Pruitt was inside and unconscious. Pruitt was inside, but apparently just taking a nap. The EPA then had to reimburse the condo owner for the damage to the door. Put another way, the EPA used taxpayer dollars to fix property owned by a top energy lobbyist’s wife. The EPA has not released details of those payments.

Pruitt is no stranger to scandal, having been heavily scrutinized for the last few months over his potentially improper use of taxpayer dollars for first-class flights and pricey hotels. But this latest controversy is more serious for two reasons. The first is that Pruitt’s living arrangement raises questions about potential corruption—a far more impactful malfeasance than frivolous spending. (New York Times columnist Paul Krugman explained the difference nicely in this Twitter thread.) The second is that officials in Trump’s White House actually seem to care about this one. Depending how much they care, and the details that continue to emerge, perhaps the new environmentalist-led campaign to kick Pruitt out of office won’t be necessary.