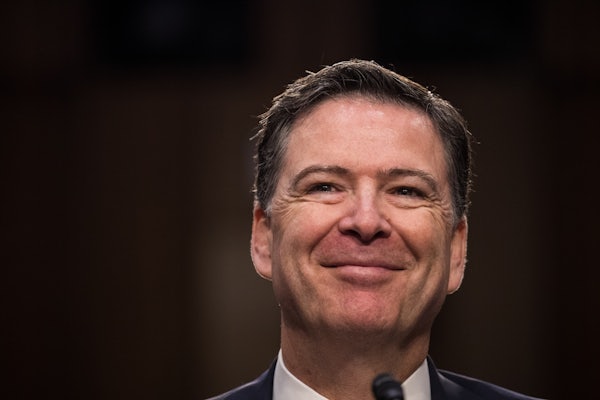 The Republicans are scared of James Comey.

The Republican National Committee just unveiled a new website, LyinComey.com, to counter whatever allegations the former FBI director levels against President Donald Trump in his new book, which goes on sale next week. As CNN reports, the RNC is also buying digital ads and sending talking points sent to GOP politicians. This counter-information campaign is a sign of how worried Republicans are about Comey’s potential to inflict political damage—and is wholly unconvincing.

For example, the RNC’s Comey site says that he “stated under oath that he never posed as an anonymous source to leak information to the press,” then notes that he “later testified that he ‘asked a friend of [his] to share the content of the memo with a reporter.’” The presentation makes these two factual statements seem contradictory when they’re not. Comey testified in a May 3, 2017, congressional hearing that he had never been an anonymous source; he told lawmakers the following June that he sent his bombshell memos to The New York Times through an intermediary only after his May 9 ouster.

Those memos laid the groundwork for allegations that Trump obstructed justice by firing the FBI director. “Comey may use his book tour to push the phony narrative that President Trump obstructed the Russia investigation,” the website warns, citing Comey’s testimony last June in which he said Trump never ordered him to halt the Russia investigation. The framing is somewhat misleading, since legal experts believe the obstruction question instead revolves around Comey’s firing itself.

The website’s release comes after Comey taped an interview with ABC News that’s set to air on Sunday night. Axios quoted an unnamed source present during the interview who said that Comey “answered every question” posed to him. Hopefully that means he’ll respond to genuine lines of criticism against him, including his decision to investigate both Hillary Clinton and the Trump campaign during the 2016 election but only discuss one of those investigations in public.