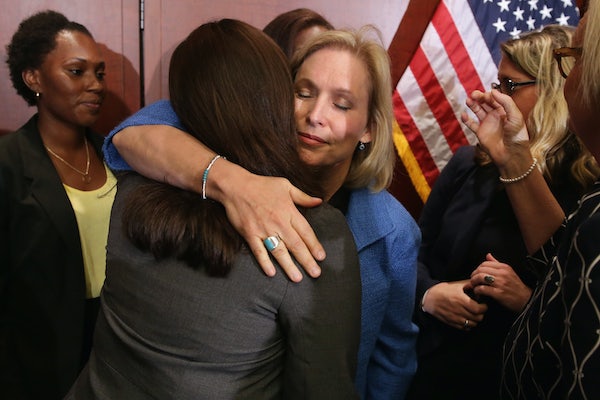 Jonathan Chait is wrong to conflate suffering with victimhood.

The New York magazine writer worries that female Democratic politicians risk falling into a “victim trap” if the media focuses too much on their experiences with sexism or harassment. “On the left, victimhood is a prime source of authority, and discourse revolves around establishing one’s intersectional credentials and detailing stories of mistreatment that reinforce them,” Chait wrote in a post on Sunday. The danger, he said, is that a “heavy emphasis on a politicians’ suffering might undercut their ability to project an image of strength and competence.”

But are stories about suffering inherently demeaning? Can’t suffering also be a sign of strength?

Consider the way that successful male politicians are often portrayed by the media. Bill Clinton, the son of a single mother, came from a hardscrabble childhood. Barack Obama overcame racism (and in a famous 2008 speech on racism, he detailed microaggressions that Chait warns against discussing). George W. Bush became a born-again Christian, helping to save him from alcoholism. Even Donald Trump has a tale of woe: He rose from the ashes of bankruptcy to become even more rich and famous than before.

Politicians tell these stories, and the media repeats them, because suffering provides a ready narrative of redemption and perseverance. It humanizes them. The same is true of the stories about Kirsten Gillibrand being sexually harassed and Kamala Harris being interrupted by male colleagues. In fact, these stories may be even more politically powerful because of how many people can relate to them—about half of the country, to be exact.