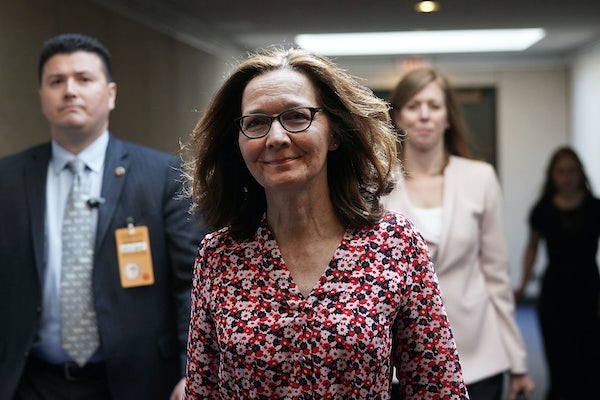 The next director of the CIA won’t condemn torture as immoral.

Gina Haspel, who is Donald Trump’s nominee to head the spy agency, found herself briefly at a loss during her Wednesday morning confirmation hearing. Democratic Senator Kamala Harris of California asked her directly if she believed torture was immoral. Haspel mostly refused to answer, saying instead that she believed the CIA “did extraordinary work” to preserve American security.

Haspel, of course, is intimately familiar with American torture practices. During her undercover career for the CIA, she oversaw the torture of prisoners under her control. One of those prisoners was Abd al-Rahim al-Nashiri, as ProPublica reported on Monday:

Those records describe how Nashiri was slammed repeatedly against a wall, locked up in a tiny “confinement box” and told (inaccurately) that the black-clad security officers guarding him were Navy sailors who would pummel him if he did not divulge his secrets. One interrogator told Nashiri he needed to be “tenderized” like a piece of meat.

Haspel hasn’t apologized for her work (even if she testified she wouldn’t restart the torture program if confirmed). Quite the opposite. She says she was following orders. She admits, openly, to having supported the destruction of videotapes documenting other instances of torture.

But she has asked senators to consider the historic nature of her nomination. She would, after all, be the first woman to lead the CIA. Perhaps we should ask Fatima Boudchar what she thinks about that.