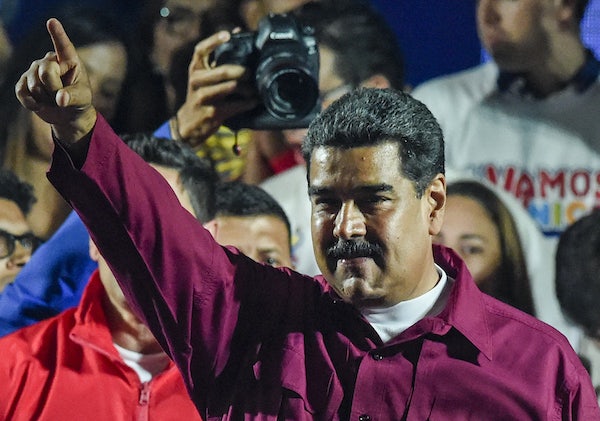 Venezuela is on the brink, and the U.S. might push it over.

President Nicolás Maduro has won a second term. The opposition boycotted the election, and turnout even in Maduro-friendly areas was quite low, according to The New York Times. Hunger, hyperinflation, and skyrocketing malaria rates can have that effect. During the campaign, turnout to rallies was reportedly boosted by food being handed out on the buses.

But neither Venezuela’s general slide into the “failed state” category nor the opposition’s accusations of vote-buying stopped Maduro from celebrating his victory Sunday night. “The opposition must leave us alone to govern,” he declared.

The big question is whether the United States—which along with the European Union, Canada, Chile, and Panama has not recognized the legitimacy of these elections—will slap new sanctions on Venezuela’s oil exports. In February, then–Secretary of State Rex Tillerson floated the idea. Current Secretary of State Mike Pompeo tweeted his thoughts on the election yesterday, omitting threats of sanctions but calling for Venezuela to free Josh Holt, a 26-year-old American held in Venezuela for two years without trial.

If the U.S. does target Venezuelan crude, the effect would likely mimic that of a sledgehammer on an already teetering three-legged chair, although whether it would actually dislodge Maduro, rather than merely crippling his people, is up for speculation.