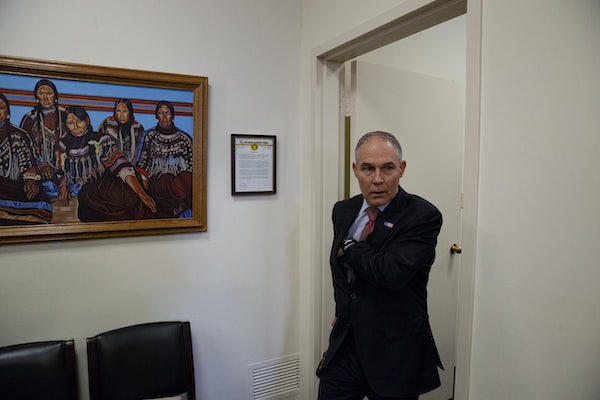 A female Associated Press journalist was allegedly manhandled by the Environmental Protection Agency’s chief’s security force on Tuesday while attempting to cover a national summit on drinking water contamination. According to the AP, guards stopped the journalist at a security checkpoint inside the EPA’s headquarters, and told her she wasn’t allowed at the two-day event, where Pruitt was delivering opening remarks. “When the reporter asked to speak to an EPA public-affairs person, the security guards grabbed the reporter by the shoulders and shoved her forcibly out of the EPA building,” the AP reported.

The female journalist—yet to be identified—was one of several reporters the EPA barred from attending the the National Leadership Summit on Per- and Polyfluoroalkyl Substances (PFAS), which are hazardous chemicals linked to cancer. CNN and environmental news outlet E&E News were among the banned, while The Hill, Politico, The Wall Street Journal and CBS were allowed to attend. EPA spokesperson Jahan Wilcox told The Hill this was because there was limited space for press. However, The Hill reported there were several “vacant” seats in the media pen during Pruitt’s remarks. Pruitt did not take questions after his speech.

Tuesday’s altercation may be the most high-profile security incident Pruitt has faced in his 15 months as EPA administrator. That’s saying something, considering that Pruitt insists on having a 24-hour security detail composed of 19 agents and at least 19 vehicles, costing taxpayers at least $3 million. Pruitt has repeatedly said this expense—as well as his frequent first-class travel—are necessary because he faces unprecedented security threats. Democratic Senator Patrick Leahy mocked Pruitt last week over that justification, saying, “Nobody even knows who you are.” Pruitt’s treatment of the press suggests he wants to keep it that way.