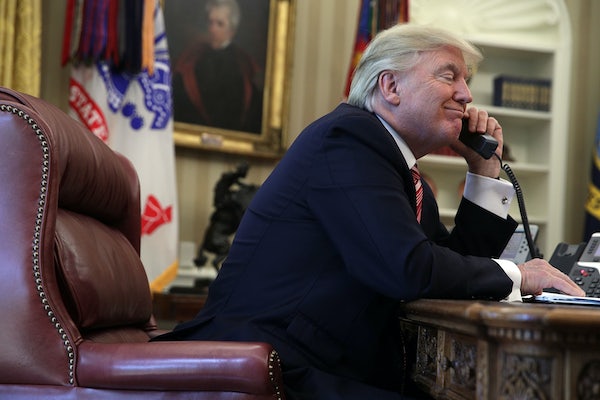 Sixteen months into Donald Trump’s presidency, picking at his writing and speaking style feels old: Much ink, Google confirms, has already been spilled on the president’s tone, which is more energetic and informal (critics might say more puerile) than previous presidents’. But Trump’s latest composition, released Thursday, has real import: a letter to Korean leader Kim Jong Un canceling their upcoming summit in Singapore.

Trump’s letter is remarkably personal. Comparable statements from previous administrations have employed a combination of first-person plural, with the “we” usually representing the administration, and the distant third person. When the Obama White House cancelled a meeting with Putin in 2013, its statement never addressed anyone in the Russian government by name. “We value the achievements made with Russia in the President’s first term,” it read. “However, given our lack of progress ... we have informed the Russian Government that we believe it would be more constructive to postpone the summit.”

Trump’s announcement came as an open letter addressed specifically to Kim Jong Un. “We greatly appreciate your time, patience, and effort with respect to our current negotiations,” the letter politely begins, then quickly moves to the first and second person: “I was very much looking forward to being there with you. Sadly, based on the tremendous anger and open hostility displayed in your most recent statement, I feel it is inappropriate, at this time, to have this long-planned meeting.”

Amid the familiar saber-rattling—“You talk about your nuclear capabilities, but ours are so massive and powerful that I pray to God they will never have to be used”—what stands out is the intimacy. The letter reads less like a thrown gauntlet and more like a passive-aggressive celebrity statement on a bad breakup: “I felt a wonderful dialogue was building up between you and me, and ultimately, it is only that dialogue that matters. Some day, I look very much forward to meeting you.”