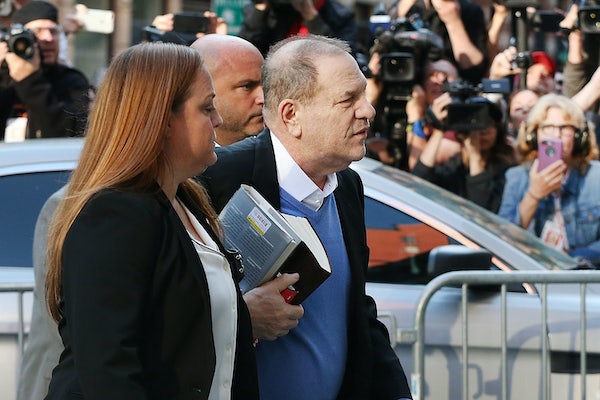 Was Harvey Weinstein sending a message with the books he carried to his arrest?

Entering a New York City police station where he charged with rape, the disgraced Hollywood producer lugged three books. Two of them have been identified: Something Wonderful: Rodgers and Hammerstein’s Broadway Revolution by Todd S. Purdum and Elia Kazan: A Biography by Richard Schickel. The third, lacking any text on its leather-bound cover, might be a journal.

Time magazine notes the Schickel’s book might relate to Weinstein’s current situation since Kazan is “among the most well-known examples of a top Hollywood figure whose behavior toward others in the industry turned him into a persona non grata.” Speaking to Le HuffPost (the French version of HuffPost), Louis Jublin, a French public relations expert, said, “He wants to show nevertheless... that he will always remain connected to the 7th art [cinema], whatever happens. It may also be an opportunity to say that in the end, like Kazan, we will remember his works and not his passage to court.”

Twitter was abuzz with speculation about whether Weinstein was sending a message with his choice of books:

A more sinister explanation is that Weinstein is trying to suggest to anyone who wants to testify against him that he, like Kazan during the anti-Communist witch hunts of the 1950s, has information that could hurt them and is willing to use it to protect himself.

Whatever his motives, having your books show up as props in Weinstein’s rape case is not publicity any author would want.