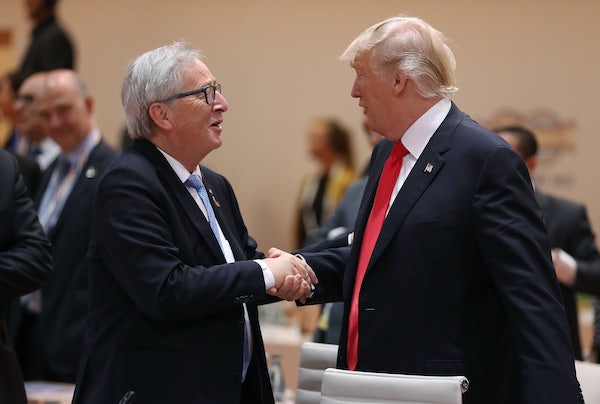 Happy Thursday: Have a new trade war—Europe this time!

The president famously tweeted that trade wars are “good, and easy to win.” This proposition will now be put to the test. The European Union has announced retaliatory tariffs responding to Trump’s earlier protectionist moves on steel and aluminum. Jean-Claude Juncker, the President of the EU Commission, tweeted:

Commenting on Trump’s trade war, Republican Senator Ben Sasse said, “This is dumb. Europe, Canada, and Mexico are not China, and you don’t treat allies the same way you treat opponents.”

Sasse’s critique hits on a key aspect of Trump’s trade and foreign policy: the president divide other nations into the category of allies and opponents. Rather, he sees all other nations as rivals, some of which are weak and others which are strong. He’s more likely to treat China, which other presidents might see as an opponent, with respect because the Asian superpower can help him on other matters (whether North Korea or business loans to the Trump Organization).

Given Trump’s division of the world into those who can help and those who can’t, it makes perfect sense for him to wage a trade war with erstwhile allies. This new economic conflict is likely to hurt America’s standing in the world simply by damaging its relationship with those very allies.