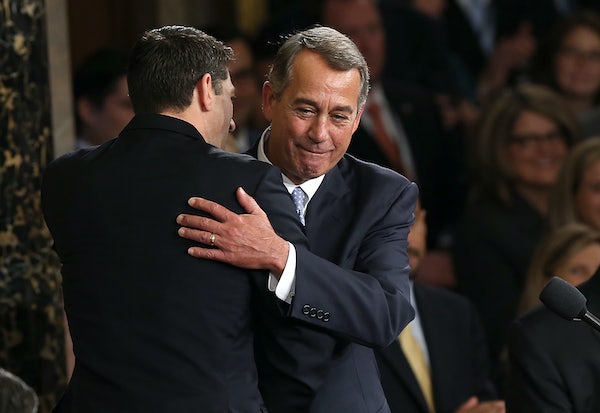 While delivering a keynote speech at a political conference in Michigan, the former speaker of the House offered an acute analysis of the GOP. “There is no Republican Party,” Boehner said. “There’s a Trump party. The Republican Party is taking a nap somewhere.”

This might sound like a damning diagnosis of a party which has abandoned all principles and become a personality cult. But as it turns out, Boehner is quite happy with the results. He went on to say that, “If you peel away the noise and the tweets, the things that he’s doing are really good things.” Boehner also said he was “thrilled the U.S. is leading” in foreign policy. The retired lawmaker waved away concerns that Trump has launched a trade war by saying that the president’s imposition of tariffs on steel and aluminum was just a hardball negotiating tactic.

It’s clear that Boehner’s pronouncements apply as much to himself as others. Like most prominent Republicans, Boehner has decided to take a “nap” and let Trump have his way even at the cost of violating norms and party principles (such as free trade). This abdication of leadership is the true reason why the Republican Party no longer really exists.