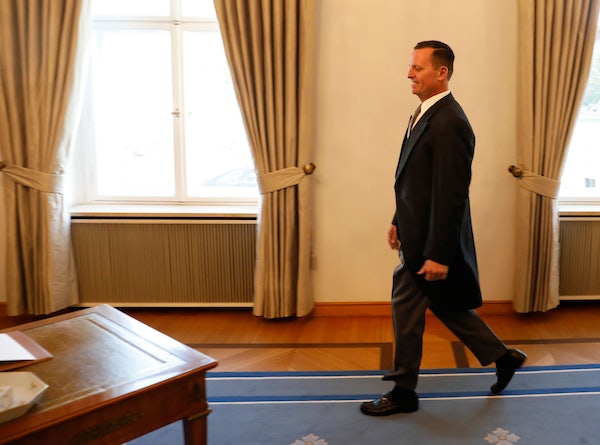 Bannonism lives on in Germany.

Richard Grenell has only recently taken up the post of representing the United States in Germany, but he’s already in hot water. On Sunday, he gave an interview to Breitbart where he stated, “I absolutely want to empower other conservatives throughout Europe, other leaders. I think there is a groundswell of conservative policies that are taking hold because of the failed policies of the left.” Germany already has a conservative government, headed by Christian Democrat Angela Merkel, but Grenell clearly wants to encourage political forces further on the right, such the anti-immigrant Alternative for Germany (AfD).

The Washington Post reports that “German newspaper headlines summarized Grenell’s comments on Monday morning as having ‘caused a stir’ and described them as ‘not diplomatic’ or as an ‘indication that Grenell would like to unseat the Merkel government.’ Leading German journalists accused the ambassador of acting as a ‘political activist.’”

Aside from the diplomatic indiscretion, Grenell’s comments are noteworthy for what they say about the ideological dimensions of President Donald Trump’s foreign policy. Former Trump confidant Steve Bannon is currently in political exile, having been forced to leave both the White House and Breitbart (though he did give CNN an hour-long interview on Friday). But Grenell’s comments show that Bannon’s core idea of creating an international alliance of right-wing nationalists lives on in the Trump administration.