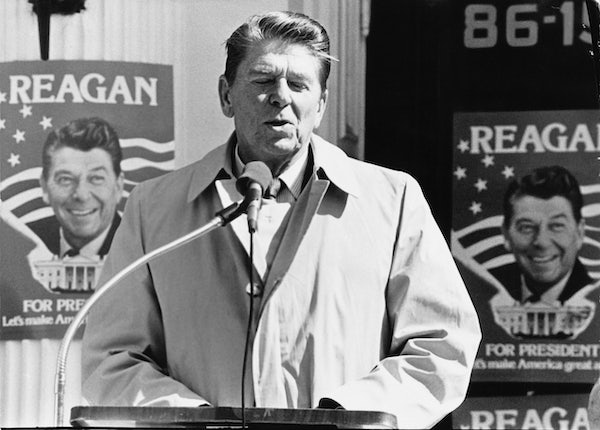 No, Ronald Reagan would not have joined the #Resistance.

Patti Davis, one of the daughters of the late president, writes in The Washington Post that Reagan would be displeased by Trump’s America. “He would be appalled and heartbroken at a Congress that refuses to stand up to a president who not only seems ignorant of the Constitution but who also attempts at every turn to dismantle and mock our system of checks and balances,” Davis argues.

Davis is right that in many crucial respects Ronald Reagan is very different than Donald Trump. Reagan was much more inclusive when talking about immigration and signed an act in 1986 that gave three million undocumented immigrants a path to citizenship. Reagan was also a free trader and foreign policy internationalist.

But even if Reagan might not have supported all of Trump’s policies, he would not have have pushed Congress to hold him accountable. The evidence from Reagan’s own life is that he would’ve been as loyal to Trump as most Republican lawmakers are. Reagan loved to cite the adage he called the 11th Commandment, “Thou shalt not speak ill of any fellow Republican.”

Reagan lived by those words during the Watergate scandal, when he was governor of California and also one of the most ardent defenders of embattled president Richard Nixon. In true Trumpian fashion, Reagan repeatedly denounced the investigation into Nixon’s crimes as a “witch hunt.” When Soviet leader Leonid Brezhnev visited America in 1973, Reagan told the press, “I just think it’s too bad that [Watergate] is taking people’s attention from what I think is the most brilliant accomplishment of any president of this century, and that is the steady progress towards peace and the easing of tensions.”

Given Trump’s sordidness, it’s tempting to romanticize earlier Republican presidents. But Reagan is a precursor to Trump.