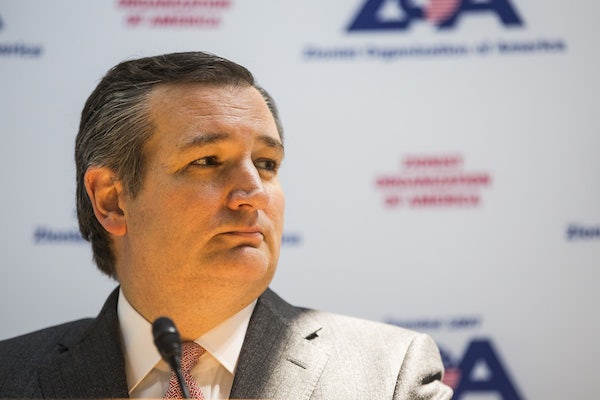 Ted Cruz forgets his own words on limits of presidential pardons.

On Monday morning, President Donald Trump tweeted, “As has been stated by numerous legal scholars, I have the absolute right to PARDON myself, but why would I do that when I have done nothing wrong?” Later that day, Haley Byrd of The Weekly Standard asked Senator Ted Cruz if he agreed with Trump that presidents could pardon themselves. Cruz paused for 18 excruciating seconds and then said, “That is not a constitutional issue I have studied, so I will withhold judgement at this point.”

Cruz was being forgetful. As legal scholars on Twitter pointed out, in 2015 Cruz authored an article titled “The Obama Administration’s Unprecedented Lawlessness” for The Harvard Journal of Law and Public Policy. In that article, Cruz wrote extensively about the powers of presidential pardon, arguing for a limited view of presidential authority.

Footnote 79 is especially relevant to current debates. “The pardon power was not seen as suspension or dispensation,” Cruz argued. “The pardon power carries a scope specifically limited to crimes already committed. The pardon may not apply to acts that have not yet been committed, because it would function as a personal waiver, the impermissible dispensation of the laws.” It is hard to square these words with Trump’s expansive view of presidential power.

In becoming a Trump supporter, Cruz has already humiliated himself in many ways. He’s become an advocate of a president who has grossly insulted both Cruz’s wife and his father. Having given up so much dignity, Cruz isn’t losing much by abandoning any claims to consistency on constitutional matters.

Update: On Monday night Ted Cruz addressed criticism of his reluctance to take a stand on the presidential pardon issue in a Twitter thread. The upshot of his thread is that he still refuses to articulate a clear position on the question: