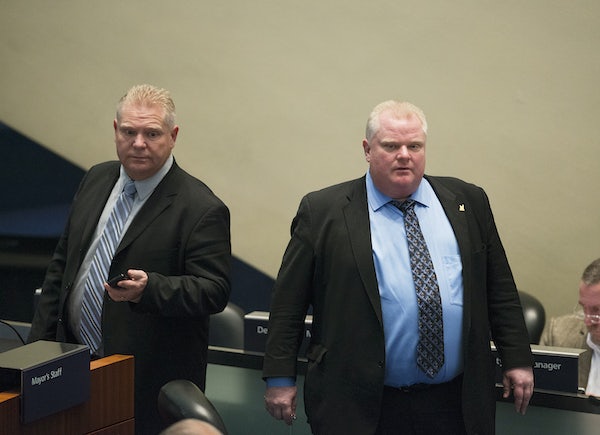 Ford, who served as mayor of Toronto from 2010 to 2014 and is best known for appearing in a 2013 video where he smoked crack, died of cancer in 2016. But he continues to cast a shadow on Canadian politics, with a family rift between his widow Renata Ford and his brother Doug Ford threatening to upend a provincial election in Ontario.

Doug Ford heads the Progressive Conservative Party which is now neck and neck with the New Democratic Party, a social democratic party, in an election to form the next government of Ontario. The election is to be held on Thursday and if the Progressive Conservatives win, Ford will be the next premier (a position roughly comparable to being a governor of an American state). Ford has been running a right-wing populist campaign, very much in the mode of his late brother and of Donald Trump, promising to sweep clean the liberal elites and run Ontario like a business.

There is considerable bad blood between Renata Ford and the Ford family. Doug Ford had been one of Rob Ford’s chief enablers, long denying that his brother had an addiction problem. There are also credible allegations that Rob Ford beat Renata and he certainly humiliated her as when he boasted to reporters about performing oral sex on her.

Now, on the cusp of the Ontario election, The Toronto Star reports that Renata Ford and her children are suing Doug Ford for $16.5 million, “alleging he has deprived them of millions of dollars, including shares in the family business and a life insurance policy left behind to support his family.” The crux of the lawsuit is that Doug Ford mismanaged Deco Labels, the family business. That complaint also goes to the heart of Ford’s campaign, which is based on the claim that he’s a successful manager.

Ontario voters will have to decide on Thursday how much more Ford family drama they want in their politics.