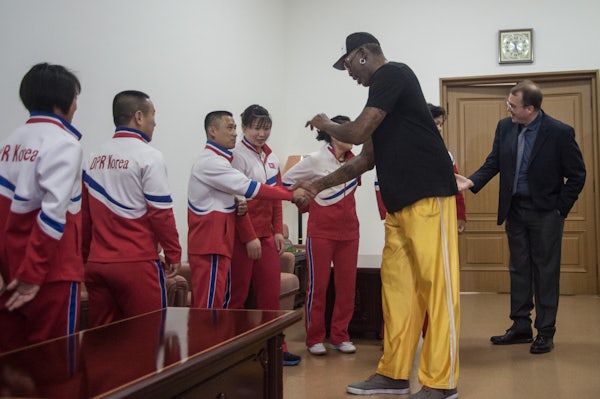 The New York Post is reporting that the summit in Singapore between Donald Trump and Kim Jong-Un will have a special interloper, retired basketball great Dennis Rodman. Sources told the Post that Rodman “could even play some sort of role in the negotiations.” Rodman has a longstanding interest in Korean peninsular diplomacy. He’s visited the isolated communist dictatorship five times since 2013.

In the past, Trump has been critical of these visits. In 2015, Trump tweeted:

Arguably, Rodman has already been an unofficial conduit. During a 2017 visit, Rodman gave Kim Jong-Un a copy of Donald Trump’s ghost-written business guide The Art of the Deal as a birthday present. “I think [Kim] didn’t realize who Donald Trump was at that time, I guess, until he started to read the book and started to get to understand him,” Rodman told the website TMZ. “Donald Trump and Kim Jong-un are pretty much the same.”

“No matter what you might think about his presence. One thing’s for sure the ratings will be huge,” a source told The New York Post. “A lot of times in situations that involve complex diplomacy countries like to identify ambassadors of goodwill and whether you agree with it or not Dennis Rodman fits the bill.”

It’s possible to dismiss Rodman’s Singapore visit as a publicity stunt. But perhaps the outsized Rodman is just the man needed to help make the equally outlandish Trump and Kim feel comfortable.