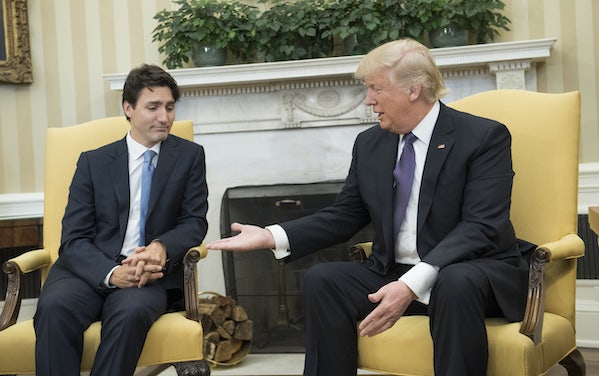 Trump is not entirely wrong about the War of 1812.

In late May, Canadian Prime Minister Justin Trudeau had a crotchety phone argument about trade with President Donald Trump. As CNN reports, Trudeau objected to the idea that Canada was a “national security” problem (the legal justification for the tariffs Trump was introducing). Trump responded, “Didn’t you guys burn down the White House?” Trump was referring to the famous burning of Washington conducted during the War of 1812. (The event actually took place in 1814.)

Pedants immediately jumped in to accuse Trump of an error. After all, wasn’t the torching of the White House conducted by British troops, under the command of Admiral George Cockburn?

Canada as an independent nation didn’t exist until 1867. What is now Canada was then known as British North America. When the United States fought a war with Britain from 1812-1815, it was, by definition, also fighting with Canada.

In fact, one of the American goals during the war was to conquer Canada and incorporate it into the United States. In the course of the war, American troops burned the city of York (now known as Toronto). While many of the troops on the British side were from the United Kingdom and other parts of the globe, there were also many Canadian-born troops as well as Native allies (most famously the Mohawks under the leadership of John Brant).