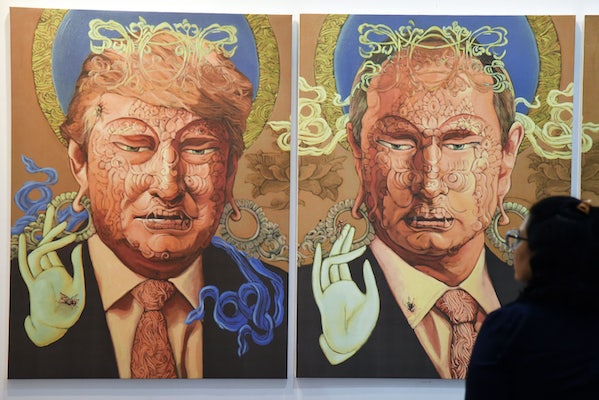 The president told reporters this morning that he wants the Group of Seven to go back to being the Group of Eight by readmitting Russia. Russia had been a member until it was suspended as punishment for the annexation of Crimea.

“I have been Russia’s worst nightmare,” Trump said. “If Hillary got in I think Putin is probably going ‘man I wish Hillary won,’ because you see what I do. But, with that being said, Russia should be in this meeting. Why are we having a meeting without Russia being in the meeting?”

The president added: “It may not be politically correct, but we have a world to run. And in the G7, which used to be the G8, they threw Russia out. They should let Russia come back in. Because we should have Russia at the negotiating table.”

Trump’s pro-Russia policy is a poke in the eye to the other G7 nations, which are all (save Italy) opposed to the move. In fact, British Prime Minister Theresa May was planning on using the G7 summit to propose an anti-Russia initiative. According to British Foreign Secretary Boris Johnson, May wants to set up a “rapid response unit to identify Russian malfeasance… whether it’s cyber warfare, assassinations, calling it out and identifying it,”