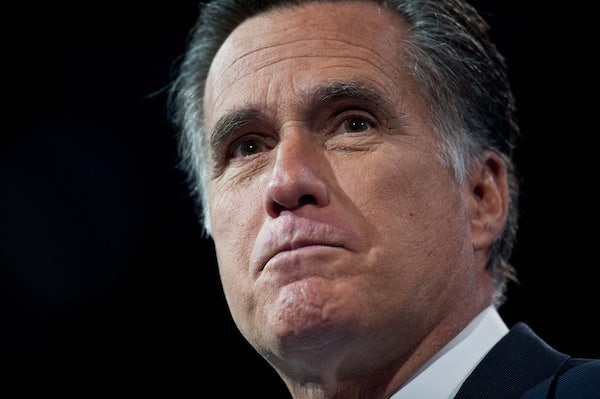 Mitt Romney is the face of Republican capitulation to Donald Trump.

In 2016, Romney was one of the most vocal Republican critics of Donald Trump, but now, as he runs for the Senate, has made his peace with his party’s standard bearer. “I think President Trump will be re-nominated by my party easily, and I think he’ll be reelected solidly,” Romney told a group of GOP donors. “I think that not just because of the strong economy and because people are increasingly seeing rising wages, but I think it’s also true because I think our Democrat friends are likely to nominate someone who is really out of the mainstream of American thought and will make it easier for a president who is presiding over a growing economy.”

Romney’s warnings of the dangers of “trickle-down racism” have been amply justified in the Trump era, which has seen a spike in hate crimes. But Romney seems no longer to care. He still voices, in muted terms, objection over Trump’s bombastic style but has no problem with the racism and misogyny. In 2016, Romney was the face of Republican resistance to Trump. Now he is the living emblem of capitulation.