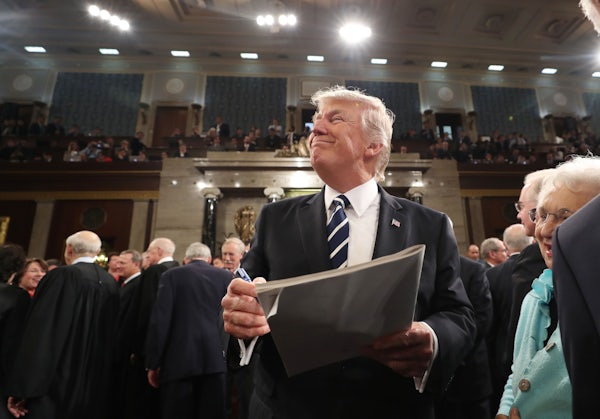 Trump’s historical legacy is being held together by Scotch tape.

The Presidential Records Act requires that any paper or document that the president touches be preserved by the National Archives. As Politico reports, this is proving to be a challenge in the Trump era because this particular president likes to rip up memos and letters once he’s done with them, his idiosyncratic “filing system” being the trash bin. “But White House aides realized early on that they were unable to stop Trump from ripping up paper after he was done with it and throwing it in the trash or on the floor, according to people familiar with the practice,” Politico observes. “Instead, they chose to clean it up for him, in order to make sure that the president wasn’t violating the law.

In pursuit of this task, government officials like Reginald Young Jr., a senior records management analyst, had to use scotch tape to reconstruct shredded documents like jigsaw puzzles.

“We had to endure this under the Trump administration,” Young told Politico. “I’m looking at my director, and saying, ‘Are you guys serious?’ We’re making more than $60,000 a year, we need to be doing far more important things than this. It felt like the lowest form of work you can take on without having to empty the trash cans.”

Young was fired by the White House in April, shortly after another official involved in Trumpian document restoration was also terminated from his job. It’s not clear whether their job was given to other officials or whether the White House has given up on the Sisyphean task of keeping Trump in conformity with his lawful duty on records preservation.